A ministry in the sky 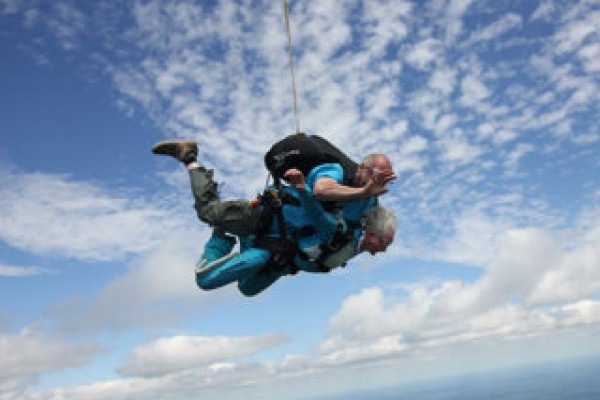 It was June 2014 when Sr. Frances Smalkowski jumped out of the airplane and plummeted over 12,000 feet, her parachute opening about mid-way to the ground – an act most don’t associate with Catholic sisters, unless, of course, one remembers the late 1960’s TV series, “The Flying Nun.” Yet, Sr Frances’ daring adventure, like all of her ministries, was grounded (pun intended) in the Sisters of the Holy Family of Nazareth’s charism of service to families.

The adventure began several months before her jump when Sr. Frances visited Dano, Sr. Rita Ashwell’s 19-year old grand-nephew who had just been in a serious accident. She noticed he was watching a video of someone flying through the air in a squirrel-like suit.

“When you recover, Dano,” Sr. Frances said. “We will go skydiving together.”

He looked up and smiled.

At Sr. Rita’s golden jubilee celebration in May 2014, Dano was there. He approached Sr. Frances, tapped her on the shoulder and asked, “Sr. Frances, did you really mean what you said?”

Less than a month later, the almost 70-year old Sr. Frances kept her promise and took service to families to new heights. Literally. With a radiant smile and contagious laughter, Sr. Frances boarded the airplane, trading a veil for a flight suit, and did her first tandem jump. (To see the video of her jump, click here.)

On the ground, Sr. Frances spends her days helping families at St. John Paul II Center, a skilled nursing facility in Danbury, CT, where she serves as the Director of Pastoral Care. She began her ministry at the center in 1984, first as a staff and head nurse, then later as a certified psychiatric nurse clinical specialist and certified chaplain.

“Daily prayer, building community through interactions with the residents, staff, volunteers and their families throughout the course of each day gives me life in my ministry,” she said. “It makes each new day unique and exciting.”

Whether helping residents adjust to new life at the Center or guiding families through end of life issues, Sr. Frances explained, “I find the face of God in a variety of places and situations and shared experiences, especially as trust grows.”

In a memorable moment that shaped her ministry, Sr. Frances recalled sitting with a centenarian woman who was nearing the end of life. She quietly stroking the woman’s forehead, offering what she thought was comfort. “Out of the clear blue, she opened her eyes,” said Sr. Frances, “and told me, ‘You should know better. You should be praying out loud for me or singing holy songs.’ She taught me never to assume I know what people want while they are dying. This exceptional woman taught me early on that our God-given uniqueness remains even in our dying.”

The opportunity to learn that important lesson, however, was nearly missed. Almost 60 years earlier, Sr. Frances’ mother adamantly opposed her only daughter becoming a Catholic sister. In the story “Moments to Remember,” written by Sr. Mary Bernard Wiecezak, CSFN, in 2010, Mrs. Frances Schenck spoke of hiding her daughter’s acceptance letter.

“I wrote to Sr. Ancilla [the novice director at the time and Sr. Frances’ former fifth grade teacher] telling her not to try to take my daughter from me,” Mrs. Schenck said in the story. “I told her if she wanted children she should go and have her own.”

Recalling the first visiting Sunday at the novitiate, Mrs. Schenck said, “Seeing my little girl dressed up in black with those awful black shoes was enough to break a mother’s heart. How could she look so happy?”

Yet, despite her initial tears, fears and struggles, Mrs. Schenck’s trust in her daughter’s decision grew and in the 2010 story, she said, “I am now a member of the Holy Family Association. Together, Frances and I share a very special bond as mother and daughter in Nazareth… I gave one daughter to the Lord, and He has given me countless others in return.”

The happiness and joy Mrs. Schenck saw growing on her daughter’s face was exactly what drew Sr. Frances to the CSFNs. Sr. Frances entered in 1960. She went on to earn a BSN and MS in psychiatric nursing and served over 35 years in part-time private practice in family and adult counseling and psychotherapy, journeying with individuals and families as they healed from pain and struggles.

“Throughout these years, I feel that my ministry has always been an integration of the education that my Nazareth provided as well as my God-given gifts and temperament,” said Sr. Frances. “Because of this, and my conscious efforts to live a Spirit-filled life each day, I can say, as the old song says, "Who can ask for anything more?”

And that skydiving experience? What impact did that have on Sr. Frances’ Spirit-filled life?

“I survived,” she said. “I never enjoyed walking on the ground around our Monroe [CT] convent as much as I did the next day… When I looked up at the sky and clouds the next day, I saw them with new eyes.”