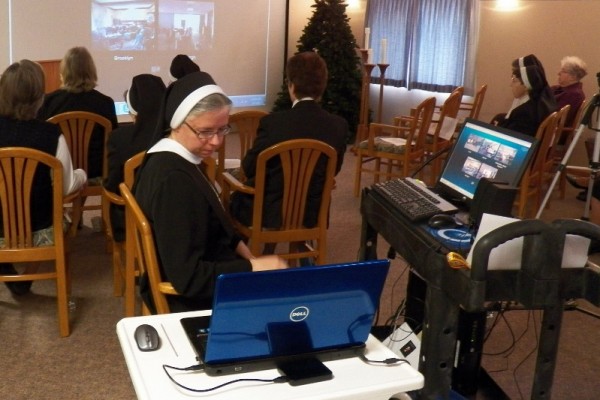 Electronic Media Coordinator (EMC), a title that seems mysterious to some, brings life and energy to Sr. Angela Szczawinska. In her role as Holy Family Province's EMC, Sr. Angela manages the province social media, which include the province website, Facebook page and YouTube Channel. To some, it might seem that such a role could get rather boring and repetitive day after day, but not to Sr. Angela.

She notes that technology is constantly changing and the way to do things in any one of these social media platforms could shift on any given day. With that in mind, she spends much time researching and reading to keep up with all the new modifications that happen. In addition to that, a "simple" post with a picture or two or even an entire gallery of photos from an event, that you or I might look at for a couple of minutes and say, "Doesn't that look nice," could actually have taken her several hours to create. She spends some days reviewing photos, selecting those that will bring in the most views, editing them so they are ready for posting, adjusting sizes for consistency and preparing a caption that will grab the internet viewer of today. The average person's lack of understanding about how time-consuming such work can be sometimes brings frustration but it can never totally overshadow the feeling of success when it all comes together.

Sr. Angela loves what she does and finds it challenging to find new and better ways to touch those who find their way to us on the internet. Although there are challenges and frustrations that come with her role, as there are for any ministry, Sr. Angela agrees with the quote: Choose a job you love, and you will never have to work a day in your life (Confucius). We don't know if Confucius really said this, and if he did, we certainly know he wasn't thinking about technology, but the philosophy rings true for Sr. Angela. She notes the dichotomy in her role as well: "As predictable as it may be, it is never the same. Though you may be doing the same kind of thing over and over again, you can find so many different ways of doing it or be presented with so many different challenges." She enjoys the search for new software that can streamline her work and help others as well.

Some people view social media with a very narrow lens; how some celebrities have used - or abused - it has colored the way that some in the public assess its value. Not so for Sr. Angela. She sees her role as vital to the internet presence of our congregation. "It is especially important in today's fast-paced world to draw people in quickly with the right image and words." She recognizes that, for many, her work is the first and possibly only exposure to our charism and ministry, and she takes that responsibility very seriously. "It's not about me. It's about us having a chance to be known and making our sisters known better. People are waiting for messages from us; it gives them hope. We are no longer physically present in the churches, schools and hospitals in the same way we once were, so this type of ministry is so important. It is a way for us to bring our message and our presence to people everywhere. It touches families in ways we never have before."

When asked how she prepared for this role, Sr. Angela responds, "I just do things. I'm not afraid to try." In her "previous life," Sr. Angela, a native of Poland, taught English and was the provincial secretary in our Warsaw province. It was in the second role that she got her first exposure to working on websites. She observes that you learn as you go and make mistakes along the way. After moving to the U.S., she took a few on-line courses to round out her knowledge and continues to learn new things every day. She also enjoys helping others in their effort to learn more about technology. As a young girl in Rawa Mazowiecka, Poland, Sr. Angela would never have imagined herself as a permanent resident of the U.S., managing the electronic media of the US province and challenging herself to learn new things and conquer new challenges every day.

She never knows what the day will bring, but she believes she has a certain innate intuition when it comes to technology. Each day's challenges (or disasters such as the website crashing!) bring with them an opportunity to learn new things -- the best part of her ministry. In addition to her daily work with the province social media and helping sisters as technology crisis arise, she also serves on the Board of Directors for Communicators for Women Religious (CWR), a professional organization with more than 200 members working in communications for religious communities. Her work with this organization, though challenging has brought her much joy, broadening her network of colleagues and, through CWR's annual conferences, giving Sr. Angela the opportunity to experience various parts of the county she might otherwise have missed. "Seeing the beauty of this country is truly a blessing in and of itself," she says.