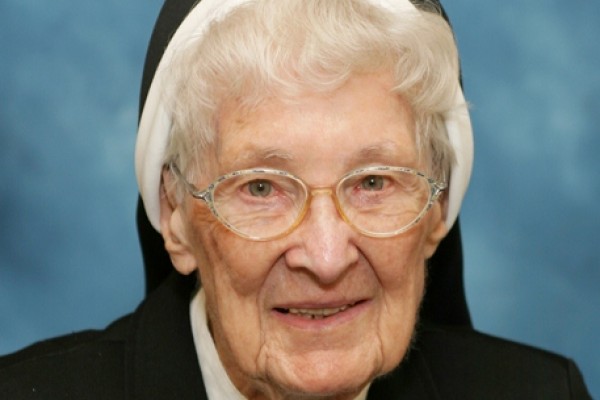 Sr. Alice Lubiak’s love of learning was a lifelong passion; whenever assigned new responsibilities, she took courses to enhance her skills — even taking a Spanish language class in her senior years.

A native of Wilkes Barre, PA, Hedwig Lubiak was two when her family moved to Erie, PA, near St. Casimir Parish where Hedwig and her siblings attended the parish school. Encouraged by her pastor, she sought admission to the Sisters of the Holy Family of Nazareth, her teachers at school. She became an aspirant while attending high school at Mt. Nazareth Academy in Pittsburgh, becoming a postulant her senior year and graduating in 1937. Now Sr. Alice, she professed final vows in 1945.

She earned a B.S. in Education from St. John College and a master’s in religious education from Providence (RI) College. In 1970, she earned a second master’s in English from Marquette University, Milwaukee. Her teaching ministry encompassed both elementary and high schools, serving in elementary schools for 19 years in Cleveland, Pittsburgh and Erie, as well as Dearborn and Allen Park, MI. For 24 years, she taught high school English, theology and journalism in Cleveland and Allen Park. An excellent teacher, she was respected by her students, particularly those in their teen years. An avid reader, she regularly encouraged her students and others to read.

Sr. Alice served in a variety of leadership roles for the congregation, including local superior at convents in Cleveland and Allen Park. She was assistant provincial superior for the then St. Joseph Province from 1986-92, and was a delegate to the CSFN General Chapter in Rome in both 1983 and 1988. From 1987-96, she served as administrator, bookkeeper and medical insurance clerk at Holy Family Manor, Pittsburgh. She moved to the Manor in 2003 after surgery for a fractured hip; still, she continued to serve as provincial librarian.

Throughout her life, she remained close to her sisters, Sophia and Angela, and brothers, Stanley Jr. and Fr. Casimir Lubiak, as well as her nieces and nephews across the U.S. and Canada. Sr. Alice maintained a life-long friendship with her girlhood friend Jane, Sr. Anece Godlewski, who died in Australia several years ago. Despite the miles, Sr. Alice was deeply saddened by the loss of her CSFN friend from Erie. Sr. Alice celebrated her 75th anniversary in religious life in 2011.