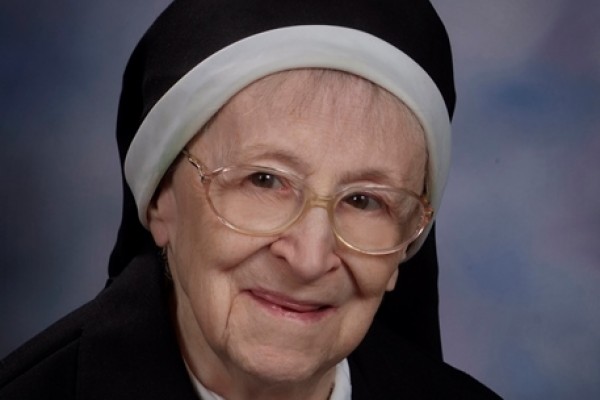 Apolonia Kowalska was one of the four surviving children of Francis and Maria Kowalski of Brooklyn, NY, all of whom entered religious life.  (Two daughters had died in infancy.) Her two older brothers, John and Edmund, became Vincentian priests, and her younger sister, Theresa Barbara, also joined the CSFNs, becoming Sr. Celine.

Apolonia attended St. Stanislaus Kostka School in Brooklyn and Nazareth Academy High School in Philadelphia, taught by the CSFNs at both schools. She graduated from the academy on June 14, 1936, and entered the congregation the following day.

A year later, on June 24, she entered the novitiate, becoming Sr. M. Redempta. She professed her first temporary vows in June 1938 and her perpetual vows on Aug. 15, 1945.

Most of Sr. Redempta’s ministerial life was devoted to education.  For a brief period, she served as a nurse’s aide at Nazareth Hospital, Philadelphia.  Then, for 54 years, she served as a teacher and principal in a number of elementary schools in Philadelphia and McAdoo, PA, Utica, NY; Derby and Norwich, CT, and Brooklyn and Elmhurst, NY.  During this time, she also served as the local superior in Norwich, CT, and South Brooklyn, NY.

She retired from teaching in 1989, but remained at St. Adalbert for six more years, serving as the librarian.  When she needed to ‘really retire,’ St. Redempta remained with her local community in Elmhurst, NY, until declining health required her move to Immaculate Heart of Mary Convent in Monroe, CT, in 2006.

Known as someone who was quiet, unobtrusive and prayerful, Sr. Redempta took care to reach out to the children at St. Adalbert’s when she served as librarian.  On days the younger children came to the library, she selected books from the shelves she though they would enjoy and spread them out on tables so the children might see them more easily.

Sr. Redempta also was known as a very loyal friend, corresponding with the mother of one of her fellow sisters regularly until the two could no longer do so.