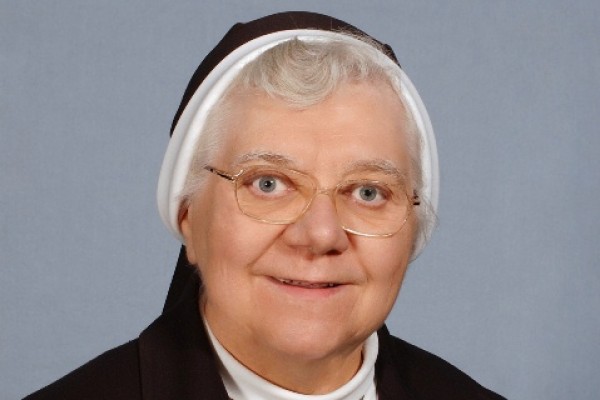 By the time young Rita reached 8th grade at St. John Cantius School, where she was taught by the CSFNs, she was certain she wanted to attend Nazareth Academy and, after graduating, enter religious life.  Her junior year, she was accepted as a postulant.  Towards the end of high school and her postulancy, Rita learned she was chosen to spend her two-year novitiate in Albano, Italy, about 25 miles from Rome and location of the CSFNs’ International Novitiate.

Upon returning to Philadelphia, Rita joined the other novices in preparing for profession of temporary vows.  As a temporary professed, Sr. Rita’s first assignment was teaching at Sts. Cyril and Methodius School in Brooklyn.  In 1961, she returned to Philadelphia, teaching at Nazareth Academy Grade School and serving as prefect of the aspirants, the young candidates to the congregation.  Soon Sr. Rita herself was astudent, studying social work at Holy Family University, Philadelphia.  Upon receiving her BA, she studied at Catholic University in Washington for her master’s.  Next stop: Wading River, NY, where she ministered as a social worker at Little Flower Children & Family Services.

She was called back to teaching at St. Mary High School in Worcester, MA, but soon returned to social work for Catholic Charities in Bridgeport, NY.  Twice she was assigned to ministry in Australia, from 1981-86 and again from 1990-94.  Transferring to Nazareth, Israel, in 1994, Sr. Rita and several other sisters assisted the bishop at the Latin Patriarchal Vicariate.  Sr. Rita also spent four years at the Generalate in Rome, translating the writings of Bl. Mary of Jesus the Good Shepherd (Frances Siedliska).

Now back in Philadelphia, Sr.Rita was a professor at Holy Family University, sometimes also serving as local superior for a Philadelphia convent and as the coordinator for the Association of the Holy Family at the university.  While a part-time professor, she resided at St. John Neumann Nursing Home.  In May this year, she decided to make a permanent move to Mount Nazareth.  After a brief hospitalization, she returned there in hospice care.