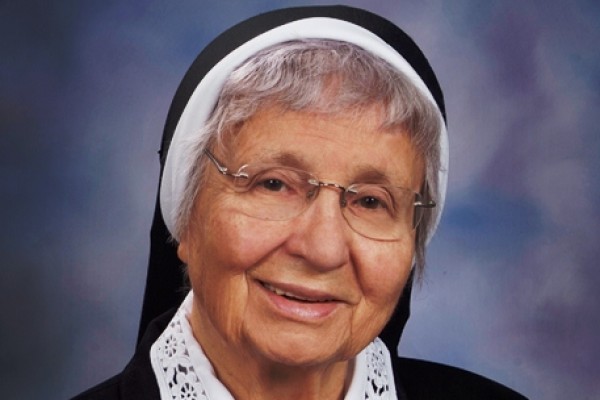 The youngest of five children, Rose Meckowska brought in the New Year in 1924 in Palmer, PA.  Eventually, the family moved to Brooklyn, where young Rose was taught by the Sisters of the Holy Family of Nazareth. She attended the sisters’ Nazareth Academy in Torresdale, graduating in 1941. One year later, Rose joined the congregation in Torresdale as a postulant. She received the name ‘Sr. Thelma’ upon becoming a novice; in the 1970s, she returned to her baptismal name and was known as Sr. Rose Thelma. Sr. Rose Thelma held a BS in elementary education from Villanova University and a master’s in English from St. Rose College, Albany, NY.

Sr. Rose Thelma served children, families and her fellow sisters as a teacher, principal and local superior over a long ministry career.  Her ministry took her to multiple locations in four states: Pennsylvania (McAdoo and Philadelphia), Connecticut (Ansonia, Norwich and New Haven), New York (Riverhead, Jamaica, Brooklyn and Maspeth) and Massachusetts (Worcester and Webster).  Her final years of ministry were in Webster, where she served at Sacred Heart Parish while helping Sr. Theresita Donach in her development work for a variety of organizations.

In 2008, Sr. Rose Thelma ’retired’ to Immaculate Heart of Mary Convent in Monroe, CT.  Accustomed to an active pace, Sr. Rose Thelma was always looking for projects where she could help.  She refurbished chapel banners and sewed for the sisters when that talent was needed, helping in many other ways as long as she was able.

Family was important to Sr. Rose Thelma.  She was always delighted to participate in family celebrations.  One of her nephews recalled how the family enjoyed their visits with Sr. Rose Thelma over the decades, and also appreciated how they came to know many of the sisters who also touched the lives of this family.

Sr. Xavier Kozubal of Philadelphia recalled that it was Sr. Rose Thelma who encouraged her to enter religious life.  Community life was important to Sr. Rose Thelma, who was the representative for the then Immaculate Heart of Mary Province on the planning committee for the 100th anniversary of Nazareth in the U.S., a big job that she did well.

Sr. Rose Thelma’s niece, Ginny, wrote a reflection that she shared with the sisters, who note that it captures Sr. Rose Thelma as she is remembered by the community.

Keep your dreams alive.  Understand that to achieve anything requires faith and belief in yourself, vision, hard work, determinations and dedication.  Remember all things are possible for those who believe.”

She recalled that Sr. Rose Thelma was:

A SISTER who inspired young minds to think for themselves and has kept in touch with students forever.

The PRINCIPAL who led her team with awareness, respect and discipline.

The MOTHER SUPERIOR who embraced the community of sisterhood.

The SOUL KEEPER whose morning prayers were spent alone with the sun shining on her through the trees forever growing to love the nature of God.

The WORLD TRAVELER who always had a bag packed “just in case” an adventure was about to begin.

The FUND RAISER whose pierogi sales were known throughout the northern hemisphere.

The BOOK WORM who probably read every book in the convent library and placed a check mark in each one to prove it.

The BANKER who always had a stash for “that something special” we would find in thrift stores.

The POLISH WEDDING BLESSER who kept the tradition of bread, salt and wine alive in our family.

The WOMAN in the red Talbots blazer who could not stop bragging about that special shopping spree every time she wore that coat.

The CHEF in the kitchen who passed on family recipes for pierogies, nut roll bread, [but] not Grandma’s cracker cake.

The ASSISTANT CHEF who would chop, dice and help prepare every meal with a smile.

The MAD SCRUBBER of pots, sinks and stained clothing.

The CHILD CARE PROVIDER who did not flinch when Jenna refused to put clothes on and CJ ate dirt pies for lunch.

The RACE CAR DRIVER who, when late for church, backed over the mail box two times and kept going like nothing happened.

The SUN GODDESS who soaked up the rays while sitting in the water in a beach chair.

The TOMATO TESTER who can sink her teeth into a tomato like it was an apple.

ONE OF MY BEST FRIENDS and confidante who never judged my lifestyle, who knows the songs in my heart, and could see the hurt in my eyes when everyone else was fooled by my smile.