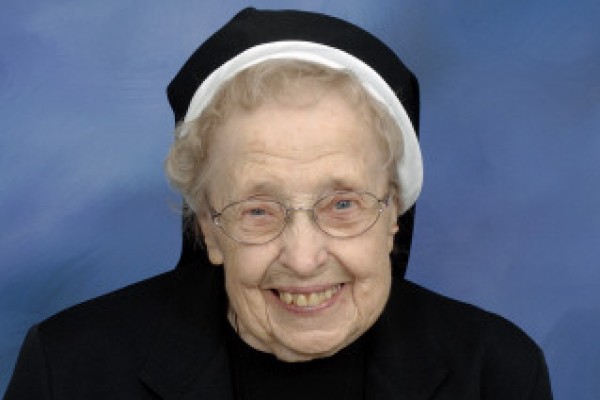 Whenever someone asked Sr. Amata Sweeney how she was doing, she always responded, “I’m happy and I’m blessed.” This approach to life can be traced back to her early years in Texas, the second child of Francis Sweeney and Sarah Hazel Walsh, who met and married in Wichita Falls. Agnes was less than a year younger than her older sister, Mary Ruth, who became a Sister of Sr. Mary de Namur. Those sisters had taught the girls at the Academy of Mary Immaculate from kindergarten through high school. Agnes enjoyed her high school years; she was a member of the Sodality and of the Junior Catholic Daughters of America. The girls enjoyed parties, camping, swimming, a few trips to Ft. Worth and Dallas, and several double dates. They considered their home a happy one, despite the death of their father at age 40.

After her junior year, Agnes worked part-time at Bethania Hospital where she encountered the Sisters of the Holy Family of Nazareth.  She began to consider becoming a nursing sister but struggled with her decision.  “Jesus pursued her, however, like the Hound of Heaven,” her eulogy notes.  She arrived at the Des Plaines, IL, provincialate in December 1939 to begin, as she put it, “a lifetime of love and happiness.”  Sr. Amata cherished her years in formation, forming a lifelong friendship with Sr. Leona Mitra, born on the same date and same year.  This past spring, they celebrated their 75th jubilee.

Sr. Amata earned her RN from St. Mary’s School of Nursing, Chicago, and her BS and MS in Nursing Education from the Catholic University of America, Washington, DC. Her nursing ministry took her to Taos, NM, then back to St. Mary’s for 13 years as director of nursing. Her students remembered her with affection for the strong foundation she gave them and for her positive approach. Next: administrator at Holy Family Hospital (now Health Center) in Des Plaines, where she enjoyed the respect of the many doctors, nurses and employees who knew her. Holy Family Hospital was her favorite place of ministry, she said, “my ministerial love.”

Sr. Amata also served as a Provincial Councilor and for 15 years in the CSFN General Administration in Rome.  Family who visited her in Rome were amazed she could speak Polish and Italian.  On her return to the States, she became a convent superior and the administrator of Nazarethville in Des Plaines.  After she ‘retired,’ she continued to serve as a volunteer receptionist at Holy Family Health Center, eventually retiring fully to Nazarethville, the nursing home she once managed.