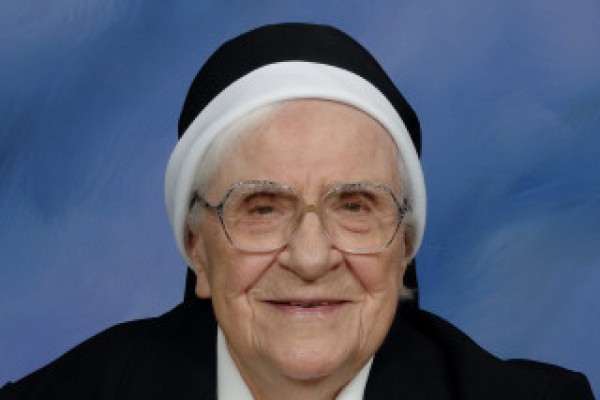 The eighth of nine children, Sr. Gertrude remembered saying her night prayers at her mother’s side and being encouraged to participate in processions at Easter and during May to honor Mary. She experienced the most joyous day in her life, she said, in May 1926, when she received her First Holy Communion, a day she always treasured.

Gertrude started her education in the public school, but after a family move, she transferred to St. Hyacinth, where she encountered the Sisters of the Holy Family of Nazareth. She was confirmed at St. Hyacinth in 1926, the year St. Therese the Little Flower was canonized and Gertrude chose the name of the new saint for her confirmation. As she began considering religious life, she contemplating joining the Carmelites, the community of St. Therese, but her mother encouraged her to consider a different path. In 1928, Gertrude became a postulant with the CSFNs. Some of her most memorable days in community were her Investiture Day, when she became a novice and received the name ‘Pulcheria;’ her First Profession Day and her Final Profession Day in 1937. After Vatican II, she reverted to her baptismal name.

Sr. Gertrude spent more than 50 years in education, earning a BS in education from De Paul University and a master’s in education from Dayton (Ohio) University. Over the decades, she served as teacher, principal and local superior. Sr. Gertrude often did double duty, also serving as sacristan in the parish church or convent, a ministry she said brought her much joy. Over the years, she taught at St. Michael, St. Ladislaus, St. Hedwig, St. Josaphat, St. Hyacinth and Immaculate Heart of Mary schools, all in Chicago; Holy Family Academy, Chicago, and St. Blase in suburban Argo. At St. Hyacinth, she also served as principal. In the 1950s, she spent a year in Rome, continuing her studies and visiting parts of Europe while there, then briefly serving as mistress of novices. Sr. Gertrude also served as the buyer at the Provincialate and eventually as a driver. She was one of the first sisters to obtain a driver’s license, and next to teaching, she said, driving was her favorite assignment. In retirement, she also served as a receptionist, before retiring to Nazarethville in 2003 at the age of 91.

Sr. Gertrude was alert to the end of her days. She had her routines, including daily coffee at 2 pm. She enjoyed bingo with the St. Alphonsus parish group and visits from family members, quizzing them about both family news and the news of the day. Though her eyesight failed her several years ago, she continued to send family members cards for Christmas and Easter, assisted by her great-nephew David. Graciousness and gratefulness were hallmarks of her character, as were her direct and stubborn ways. During a recent visit to the emergency room, she was giving orders to the technician and nurse.

Throughout her long life, Sr. Gertrude had a deep devotion to the Merciful Heart of Jesus, to the Precious Blood of Our Lord and to the Holy Spirit.