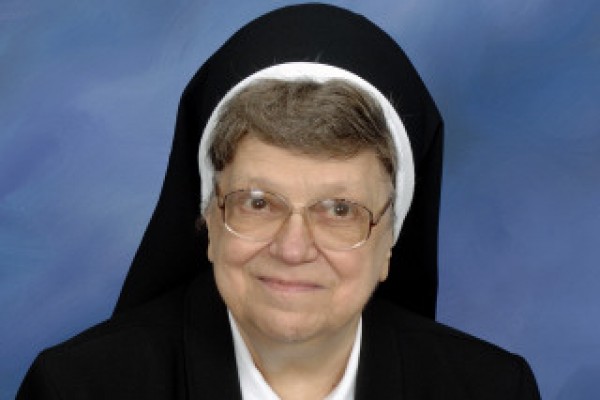 Eleanore Nowakowska grew up as part of a large, blended family as both of her parents had been widowed and had children from their first marriages. She always noted that the families blended well.

Young Eleanore attended St. Hyacinth School, staffed by the Sisters of the Holy Family of Nazareth; St. Wenceslaus School, run by the Felician Sisters, and Holy Family Academy, all in Chicago. After high school, she began studies at Mundelein College. Later, she worked in the Research Department at Encyclopaedia Britannica while discerning her vocation. She was accepted as a postulant on Jan. 12, 1947, the Feast of the Holy Family, professing her first vows in August 1949 and perpetual vows in August 1956. As a CSFN, her life became quite an adventure.

A consummate teacher, Sr. Benedicta began her 25-year teaching ministry at St. Ann School; a year later, she was assigned to St. Josaphat Commercial High School teaching young teenagers, one of whom became a fast friend to this day. Rosalie recalls being impressed with Sr. Benedicta’s honesty, fairness and strong faith, as well as her ability to create a family with 33 girls. The friendship grew, and in more recent years, Rosalie’s daughter adopted Sr. Benedicta’s great-niece, who had lost her mother tragically.

Sr. Jolanta Polak became acquainted with Sr. Benedicta as Sr. Jolanta was preparing for final vows while Sr. Benedicta was a novice. Later, they spent six years together at St. Josaphat Parish on Chicago’s North Side, cementing their friendship.

A year after professing her perpetual vows, Sr. Benedicta was named the Director of Postulants in Des Plaines, serving five years in that ministry. Growing up in a large family enabled her to guide the aspiring candidates to a life of love and service. During this time, she composed the words for the song, “We’re God’s Chosen Few,” which became the theme song of the postulants. On most days after prayer and dinner in the Provincialate, the postulants headed for the grotto to sing to and praise our Lady before returning to St. Joseph’s Hall, where they lived during those years. Sr. Benedicta was devoted to Our Lady of Fatima, spreading this devotion whenever she could.

In addition to St. Ann’s and St. Josaphat’s, Sr. Benedicta spent her years teaching at elementary schools in Chicago and Cicero, IL; Irving, TX and at St. Emily School in Mt. Prospect, IL. She spent 15 years teaching 6th-graders at St. Emily’s, augmenting the traditional subjects with special programs of classical music and opera. During the Christmas season, she organized trips to Arie Crown Theater for performances of Tchaikovsky’s Nutcracker. In addition to teaching the fundamentals of the Catholic faith, she also introduced her students to Judaism; each year, they would enact the Passover, with each student bringing part of the Seder meal. Sr. Benedicta also developed classes on the Holocaust, culminating in a trip to the Illinois Holocaust Museum in Skokie – subjects well beyond the typical 6th-grade curriculum of the day.

Between her teaching assignments, Sr. Benedicta served as provincial secretary in Sacred Heart Province for three years before being elected as Secretary General, serving the international congregation from Rome for 12 years. She has photos with Pope Paul VI and met Pope St. John Paul II several times, treasuring these moments and mementos.

Toward the end of her active ministry, Sr. Benedicta served as the administrative assistant to Sr. Lucille Madura, then administrator at Nazarethville, for 10 years. She spent her next three years working in the Development Office, where she endeared herself to the Development and Communications staff. Following hip surgery in 2011, Sr. Benedicta went to Nazarethville to recuperate and decided to remain as a resident. There she began her final ministry of care for those around her, particularly those with whom she shared her meals.

In November 2013, Sr. Theresa Marie Czarny made one of Sr. Benedicta’s final wishes a reality: she drove Sr. Benedicta to Holy Innocents Parish in Chicago, where young Eleanore had been baptized. The pastor was welcoming, explaining the restorations that had occurred over the years. Seemingly in awe, Sr. Benedicta touched her forehead to the font, a grace-filled moment that she and Sr. Theresa Marie recalled fondly.

Sr. Benedicta’s last assignment occurred during the summer of 2014, when she and Sr. Gemma Pepera were chosen to be featured in a video and TV commercial for the Retirement Fund for Religious special collection late in the year. She told the interviewer: “When I think about teaching, I am constantly reminded that the Holy Spirit is the real teacher.” The interviewer noted, “If the Holy Spirit is the teacher, then Sr. Benedicta has certainly been a vessel through which to share the message.” Near the end of the video, Sr. Benedicta tells the viewer, “I hope there is a teaching job for me in heaven.” Her many friends are confident that she is enjoying her new classroom, one of the many rooms in the Father’s house.

Photos and the video can be viewed by clicking HERE.