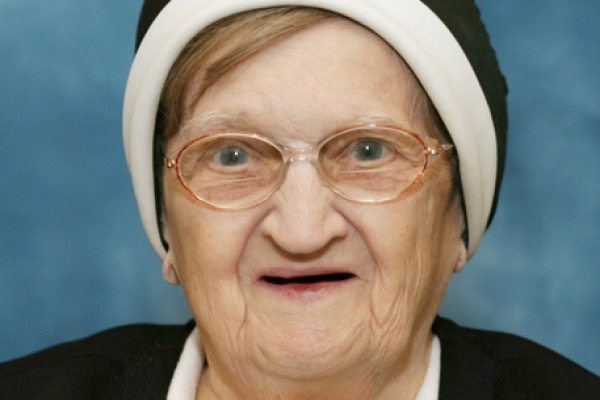 A Cleveland native, young Clara Krakowski knew from an early age that she wanted to become a Sister of the Holy Family of Nazareth (CSFN). The youngest of seven children, she attended St. Stanislaus Parish School in Cleveland, where she was taught by the CSFNs.  In church with her family, Clara would see the sisters enter and genuflect by fours. Once she told her mother, “I want to be one of them.” She never wavered in that intention.

Her mother was concerned that Clara would return home if she entered the convent too soon, so they waited until Clara was in 10th grade. Then she moved to Pittsburgh, became and aspirant and attended Mount Nazareth Academy, graduating in June 1938.

Clara was so busy and happy at the Academy that she did not think to write home. After a month, her brothers visited to take her home to Cleveland as her parents thought she was lonely. Clara would not leave with them. She let her family know that she wanted to share her happiness by serving God as a CSFN. Completing her postulancy, she became Sr. M. Floretta when she entered the novitiate.

After professing her her first vows, she began her lifelong ministry in education. She particularly enjoyed teaching 1st grade where she could watch great changes unfold in her students from the first day of school until they entered 2nd grade. She enjoyed teaching her pupils how to read, write and count. In Erie, PA, she even taught them to climb stairs – the 1st-grade classroom was on the 3rd floor. Sr. Floretta taught at schools in Ohio, Alabama and Pennsylvania. In the Diocese of Pittsburgh, she also served as principal at several schools.

In 1982 while principal of St. Philomena Elementary in Beaver Falls, PA, Sr. Floretta participated in a teacher workshop presented by a handwriting analyst. The analyst described her as optimistic with an intellect that was investigative, inquiring and highly analytical. She was seen as one who desires to protect both her principles and those she loves. The analyst also noted that Sr. Floretta’s musical talent enabled her to lighten others’ spirits. She had been a key member of the Pittsburgh Sisters’ Orchestra, playing violin. A grandniece attributed her own talent and love of music to Sr. Floretta and Sister’s desire to share her love of music with her family.

In 1983, she became administrator and local superior at Holy Family Manor in Ross Township, Pittsburgh, retiring there in 2000. She was known for a quick sense of humor and her readiness to join in the singing during any entertainment at the Manor.