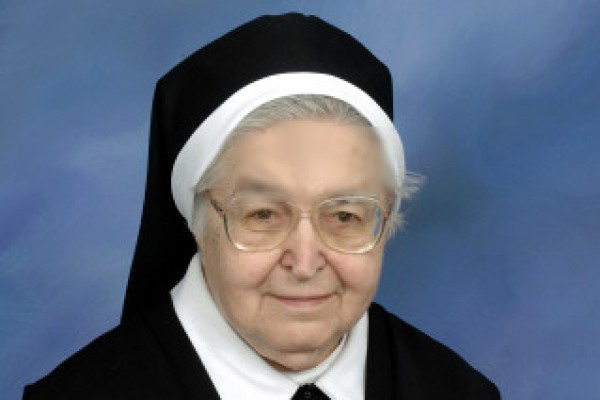 Longtime elementary teacher and sacristan for the Provincialate Chapel, Sr. M Hyacinth Zawalinska died quietly on Friday afternoon, Jan. 22, just a few hours after enjoying a piece of angel food cake with a nursing assistant at Nazarethville in Des Plaines, IL. Sister had been feeling poorly on and off for a few weeks, and that Friday was one such day. The Nazarethville physician checked her over, thought nothing serious was wrong, but ordered some lab tests. Before the lab work was completed, Sr. Hyacinth asked to lie down. By 4 pm, she drew her last breath, leaving everyone in a state of shock.

Valeria Zawalinska was born in Chicago, the youngest of four children of immigrant parents. She attended St. Hyacinth Grade School and St. Ann High School, where she was taught by the Sisters of the Holy Family of Nazareth. Just a month shy of her 21st birthday, young Valeria became a postulant and six months later became a novice with her new name, ‘Hyacinth.’ Two years later, she professed her first vows and began teaching 3rd grade at St. Michael School on Chicago’s South Shore.

Sr. Hyacinth earned a B.S. in Education from Loyola University, and used that education for 40 years in elementary school classrooms in the Chicago area, as well as in Texas, Indiana and North Dakota. As Sr. Hyacinth reflected on her teaching experience, she described her classrooms as hallowed ground. She explained, “I was formed to believe and to respect the teachings of the Church, seven days a week. Therefore, I hoped to transfer that tradition to the second- and third-graders who entered my classroom.”

In 1989, Sr. Hyacinth attended the beatification ceremonies for Mother Foundress in Rome, and in 2000, she attended those same rituals for the beatification of the CSFN Martyred Sisters. Just a year earlier, she had made a pilgrimage to the Holy Land, a major highlight.

Over the years, Sr. Hyacinth stayed in close contact with her family. She had spoken with her nephew in Florida just a week before her passing. Her nieces and cousins attended her funeral at the Provincialate.

Among Sr. Hyacinth’s papers was the following, printed neatly on a tiny piece of paper:

You received a spirit of Adoption. The new will of God as a New Creation.