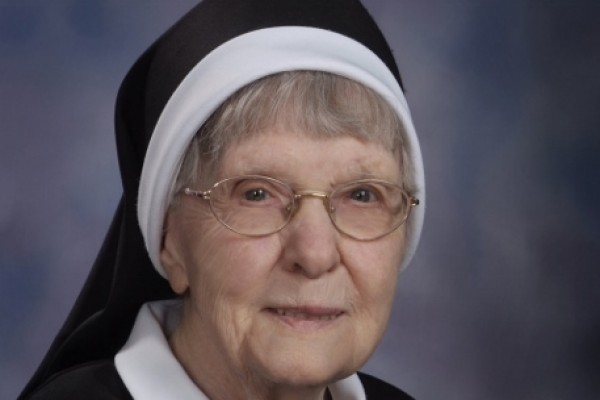 Young Irene Agnes Kolakowska first encountered the Sisters of the Holy Family of Nazareth (CSFN) as a student at St. Mary’s Parish School in Worcester, MA. The Sisters’ community, charism and devotion to the Holy Family would be central to Irene throughout her long life.

She remained under the wing of the CSFNs during high school, attending Nazareth Academy in Philadelphia.  A week after graduation, Irene became a postulant with the Sisters in Philadelphia, despite her mother’s objections, ignoring her mother’s offer to buy her a fur coat if she changed her mind!  Irene -- eventually, Sr. M. Dulcissima – never got that fur coat; instead, she spent almost 81 years in Nazareth.

Seventy percent of Sr. Dulcissima’s nearly 81 years in religious life were spent in education, teaching at elementary and secondary schools, as well as serving as a principal. Her ministry took her to Pennsylvania; Puerto Rico; Brooklyn and Queens, NY; Massachusetts, and Connecticut. She also served as a local superior in Puerto Rico and Pennsylvania. Some years ago, she wrote, “My most satisfying work in my last ministry was preparing CCD students for First Holy Communion. I looked at it as my greatest task God asked me to undertake.” More than grade levels and administration, Sr. Dulcissima’s educational expertise was in bringing Jesus to children, be they in grade school or high school.

Over the years, she earned a BS in secondary education from Villanova University and an MA in Spani9sh and Education from the Catholic University of America. She earned various specialty certificates and received the National Catholic Education Association Distinguished Graduate award in 2001. More than her awards, Sr. Dulcissima marveled at the times “her boys” came to visit – as they did for her 100th birthday celebration earlier this year.

A fellow sister and former student recalls Sr. Dulcissima as “a very, very good teacher. She explained things so well that her students didn’t have to do homework because they understood what she taught them.” Whether in Puerto Rico -- where her students had no shoes, books or pencils -- or in more affluent environments stateside, Sr. Dulcissima loved teaching and considered her students her gifts.

Sr. Dulcissima’s devotion to prayer was contagious. As an elementary school teacher, she would bring her young charges to the sisters’ chapel, explaining that Jesus was in the Tabernacle, then praying with them. As they left school, they would run to their parents, excitedly telling them how Sister had taken them to church and prayed with them.

Throughout her long life, Sr. Dulcissima was known for her radiant smile. It was on full display when she celebrated her 75th Jubilee in 2015, as well as at her 100th birthday party this year. When someone suggested singing Sto lat (100 Years) to her, Fr. Richard, her cousin, said, “No, she’s already there!”