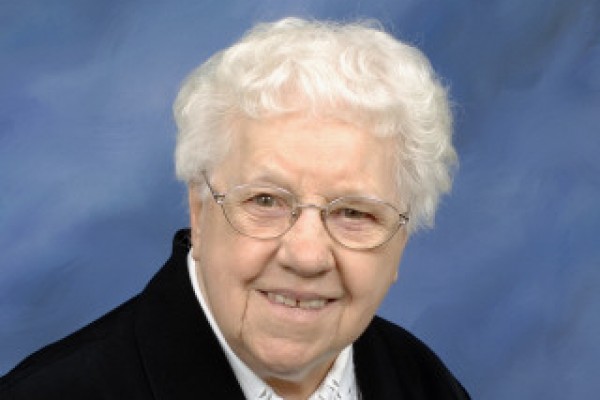 At six years old, Dolores Kazmierczak announced to her teacher and family her intentions to become a Sister. They dismissed her plans, convinced she would change her mind. Yet, guided by God’s loving call and inspired by three aunts who were Sisters of the Holy Family of Nazareth, Dolores entered the same congregation on September 19, 1939.

Dolores was born on June 11, 1922, the first child and only daughter of Teresa Kotowska and Stanislaus Kazmierczak. Her family, which grew to include her three younger brothers, lived in the West Pullman area of Chicago where she attended Assumption BVM. She spent her freshman year at Fenger High School, a public school in Chicago. Thanks to generous financial arrangements made possible by her pastor, she transferred to St. Louise Academy, also in Chicago, for her sophomore and junior years. She completed high school at Villa Nazareth in Des Plaines, Illinois.

After her first profession of vows on August 16, 1942, Sr. Dolores began teaching at St. Hedwig School in Chicago. Over the next 40 years, she taught in Chicago at Holy Trinity, St. Hyacinth and Assumption BVM; in Texas at St Luke’s in Irving, St. Thomas Aquinas in Dallas and St. Andrew in Fort Worth; and in Indiana at St. Stanislaus in South Bend. She also served as principal at Assumption BVM and St. Hyacinth in Chicago and at St. Patricia in Hickory Hills, Illinois.

Sr. Dolores received her Bachelor of Philosophy in 1955 from DePaul University and a Master of Arts in Education from Notre Dame University in 1964.

In addition to teaching, Sr. Dolores also served as a pastoral associate in Evansville, Indiana; a core member of the Nazareth House of Prayer in Schiller Park, Illinois; and the director of St. Joseph Retreat Center in Des Plaines. She also organized a Diocesan Council of Sisters in Fort Worth, Texas and did mission work among migrants in Vernon, Texas. Additionally, Sr. Dolores worked in social services at Nazarethville, a personal care facility in Des Plaines, where she became a resident in 2011. She was also active in the Midwest Chapter of the Association of the Holy Family, serving as director from 2007 until she moved to Nazarethville.

For the Province Assembly in 2016, Sr. Dolores was asked to reflect on her years as a Sister of the Holy Family of Nazareth. She said, “As always, I believe in God’s plan for me. I live with this belief and I live peacefully, happily, accepting whatever His hand holds out to me.”

She went on to say, as she reflected on life and death, “To me, death is a part of life. It is something to look forward to and something we should always keep in mind… that it can only be a moment away from life.”

On August 2, 2016, Sr. Dolores passed quietly at Nazarethville. Her funeral Mass was celebrated at Sisters of the Holy Family of Nazareth Provincialate in Des Plaines on August 6, 2016 on the Feast of Transfiguration. She was interned at All Saint’s Cemetery adjacent to the Provincialate.