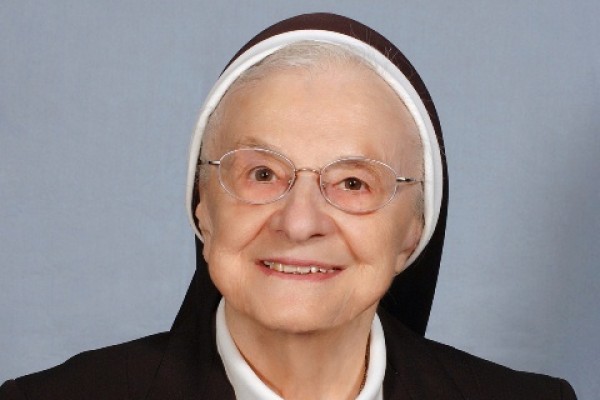 Hedwig Samko, called Agnes by family and friends, was born in Worcester, MA on August 20, 1920. She, along with her twin sister Frances, were the daughters of Joseph and Stephanie (Moszczynska) Samko. The baby girls were welcomed home by their older brothers Alphonse and Charles. (Sr. Salvatore’s siblings, including her twin sister in 2007, proceed her in death.)

Mr. Samko, an expert tailor who worked at an exclusive shop in downtown Worcester, sewed Agnes and Frances’ coats and made them matching muffs to protect their hands from the frigid New England weather. Though they were fraternal twins, Mrs. Samko preferred to dress the sisters alike.

Both girls attended St. Mary School in Worecester, MA through eighth grade where they first encountered Sisters of the Holy Family of Nazareth. With the positive influence of God, the sisters and her mother, Agnes chose to attend Nazareth Academy in Philadelphia to begin to discern her religious vocation. Frances had her own plans, and the twins separated for the first time.

Life as a student at Nazareth Academy was a smooth transition for Agnes. Her days were filled with academic classes, extracurricular activities, a spiritual formation program, small chores and study.  Holidays and summers were enjoyed in Worcester with her family.  On June 6, 1938, before her senior year, Agnes became a postulant and continued her discernment which would make religious life a reality.

During this formation period, Agnes had numerous opportunities for personal growth and development in Christian maturity.  She spent time in prayer, discerning the authenticity of her vocation to religious life.

On June 22, 1939, Agnes, dressed in a black habit and white veil, received the name Sister M. Salvatore and became a novice. This intense two-year spiritual preparation program provided opportunities for Sr. Salvatore to grow in intimacy with Jesus through prolonged periods of prayer, study of and meditation on Sacred Scripture and participation in the liturgical life of the Church.

At the completion of her novitiate on June 20, 1941, Sr. Salvatore made her profession of temporary vows, receiving a black veil and a Nazareth cross.

On August 12, 1947, she made her perpetual profession of vows, received a silver ring with the inscription “My Beloved to me and I to Him” and became known as Sr. M. Salvatore of Jesus and Mary.

Sr. Salvatore earned a Bachelor of Arts from Holy Family College in Philadelphia and a Master of Hospital Administration degree from St. Louis University in Missouri. For more than 55 years, she was a visible and loving presence at Nazareth Hospital in Philadelphia where she served as an x-tray technician and administrator. In January 1987, Sr. Salvatore became the first President of the Nazareth Healthcare Foundation. Though she retired in October 1999, she continued to be a very active presence in the volunteer department at the hospital.

“I loved being faithful in praying for and visiting the sick,” Sr. Salvatore said about her tenure at the hospital.

In January 2012, Sr. Salvatore became a resident of Mount Nazareth in Philadelphia. Even in declining health, she remained prayerful and pleasant.

On November 7, 2016, in the 78th year of her religious life, Sr. Salvatore passed away at Mount Nazareth. Her Mass of Resurrection was held at the Chapel of Mount Nazareth on November 14, followed by interment at Community Cemetery, both in Philadelphia.