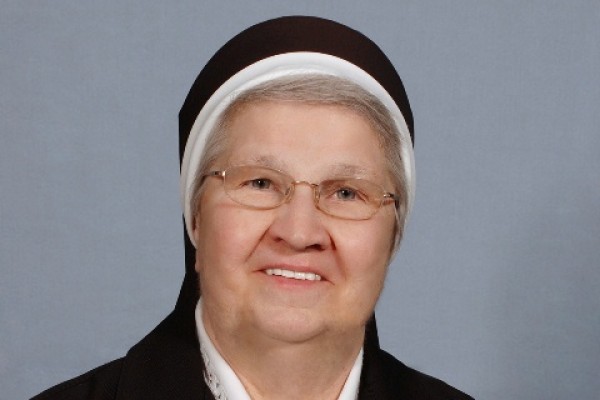 Joan was born in Norwich, CT on August 8, 1932 to Dominic and Joanne (Przekop) Cholodowski, who owned a productive milk farm in Norwich. She had three sisters and one brother, John.

Joan and her siblings attended St. Joseph School, which was staffed by the Sisters of the Holy Family of Nazareth. It was here that the seed of a religious vocation was sown in her heart.

On a visit to Philadelphia to see her brother, she toured Nazareth Academy High School and immediately voiced her decision to become a student there and discern a possible vocation to religious life. In September 1946, she entered Nazareth Academy.

On January 8, 1950, while still a student at Nazareth Academy, Joan became a postulant in the Congregation of the Sisters of the Holy Family of Nazareth. In July 1950, she became a novice and was known as Sr. Antonia Marie. She professed her temporary vows on July 3, 1952 and final vows on August 12, 1958.

Sr. Antonia Marie possessed a great sense of humor, and enjoyed her life and her family.

On the morning of March 21, Sr. Antonia Marie began to experience difficulty in breathing, so she was taken to Nazareth Hospital Emergency Room. The prognosis was not good, so the decision was made to take her home to Mount Nazareth and have her placed on hospice. The Lord had other plans. While preparations were being made for her transfer, He came and took her to His home. Her suffering was over.

A Mass of Resurrection was celebrated on March 27, 2017 at Jesus of Nazareth Convent – Mount Nazareth in Philadelphia. Interment was at Community Cemetery.