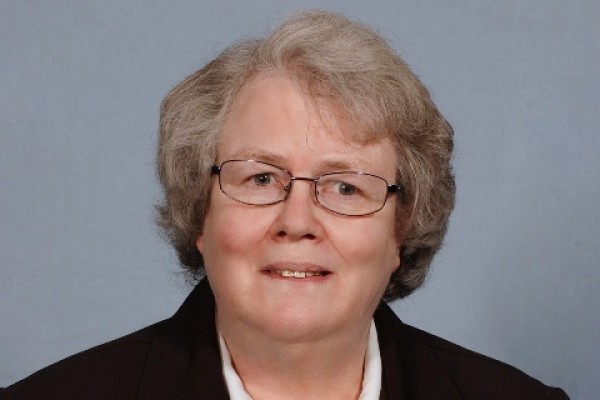 Born in Philadelphia, PA, Eileen was the third child of James and Virginia Drummy. Early in her childhood, her family moved to Palmyra, NJ, where Eileen completed primary school at Sacred Heart in Riverton. In December 1963, during her first year at Nazareth Academy High School in Philadelphia, the tragic and senseless death of her sister, Maureen, had a traumatic impact on Eileen. The love and concern of the CSFN Sisters became a healing balm that she would later share with others.

After graduating high school in 1966, Eileen continued her studies at Holy Family College (now Holy Family University) in Philadelphia, where Sr. Lillian Budny, CSFN became a defining influence on her life and vocation. After completing a B.A. in History in 1970, Eileen remained close to the sisters, taking a position in medical records at Nazareth Hospital. The ‘hospital sisters’ deepened and expanded the draw that religious life had on Eileen’s heart.

Her early assignments included the library at Holy Family College and the office at Nazareth Academy. She also served as a teacher at Our Lady of Calvary in Philadelphia. Assigned to Mount Nazareth Convent (1980-1985) during temporary profession, Sr. Eileen drew inspiration from the older sisters who lived there. Their example of quiet simplicity and genuine love, expressed in a hidden life of countless ministrations had a profound impact on her. There, she learned the art of listening well, as the sisters modeled for her the patience of living through struggles one moment at a time.

After perpetual profession on January 19, 1985, Sr. Eileen returned to the medical records department at Nazareth Hospital. She earned an Associate Degree in Health Records at Gwyndd-Mercy College (now University) in 1985 and using her gifted intelligence and savvy technological skills, she ministered in healthcare as a coder for more than 30 years. Knowledgeable about healthcare services, insurance guidelines and reimbursement issues, in 2015-2016 she served as a Pathology Specialist and Editor for a coding school.

Sr. Eileen was inspired by scientific and medical discoveries, fascinated with mechanical and technical systems, and explored the cultural and historical opportunities in the Philadelphia area.

An avid reader, she enjoyed the Sunday Crossword puzzle, and the works of Thomas Merton, J.K. Rowling, C.S. Lewis, Charles Shultz, and countless others. She was a fan of NPR, Public Television, the Philadelphia Phillies, Snoopy, This Old House, cooking shows, the DIY Network, and was a reliable source for the horses in the running to win the Triple Crown.

Through her struggles and ill health, she remained a bona fide original who understood that the value of wellness lies in wholeness. Her sense of humor, quick wit and unassuming nature enriched her family and sustained life-long relationships with faithful friends who were blessed to know her.

With this final illness, Sr. Eileen was calm and peaceful, knowing she had the companionship of her loved ones on this final journey. She was aware that her time was short. She shared her concerns for those who would be left behind, and received their assurance of love and support. She quietly passed away on August 11, 2017.