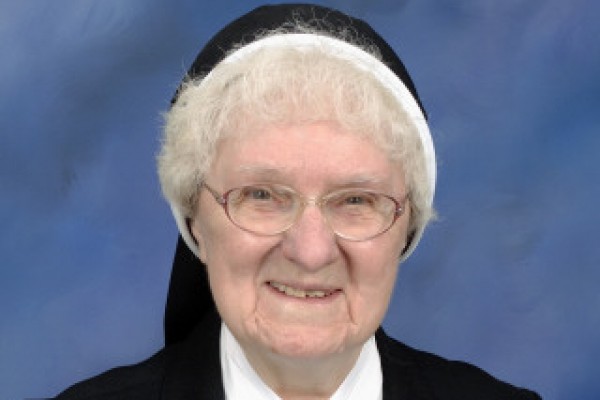 Eleonore was born in Chicago on March 18, 1924 to Stanley and Catherine (Moskwa) Falat. The youngest of seven children, she attended St. Michael School and transferred to Holy Family Academy in Chicago for her junior and senior years. Following graduation, she began working at Catholic Charities of Chicago with Bishop Wycislo.

During World War II, Eleonore’s brother, Walter, was killed in Germany. Although she had wanted to enter the convent earlier, her mother would not allow her until another brother, Raymond, returned home from the Army. With her mother’s permission, the 22-year old Eleonore entered the Congregation on January 12, 1946. She professed first vows on June 27, 1948 and perpetual vows on August 14, 1954.

Sr. Marcella received a Bachelor of Science in Education from Loyola University and later a Masters in Education and Supervision from Sienna Heights College.

From 1948-2008, she served as teacher and principal at schools in the Chicago area, including Holy Trinity, Immaculate Heart of Mary, St. Patricia, St. Ladislaus, St. Emily, St. John the Baptist and Mary of Nazareth. She also spent three years at St. Andrew the Apostle School in Texas. Additionally, she served as a Provincial Councilor and Director of Ministry.

One of her former students, who later became a Benedictine priest, described Sr. Marcella’s serenity and unobtrusive goodness when he wrote, “I think often of your kindness and encouragement to me as a young boy. You are a wonderful example of a religious – dedicated, supportive, a great teacher and above all a leader...”

Sr. Marcella retired in 2008, serving as a receptionist at the Provincialate. She was eager to stay involved in the rhythm of community life and was a wonderful example of how to age with grace and dignity.

She once wrote, “I hope and pray that when my mission on earth is complete, I can hear these words: Well done, good and faithful servant, enter into the joy of your Lord.”

On the evening of September 15, Sr. Marcella was called home to God.

Her funeral liturgy was celebrated on September 19 at the Provincialate Chapel in Des Plaines, IL.  Interment was at All Saints Cemetery.