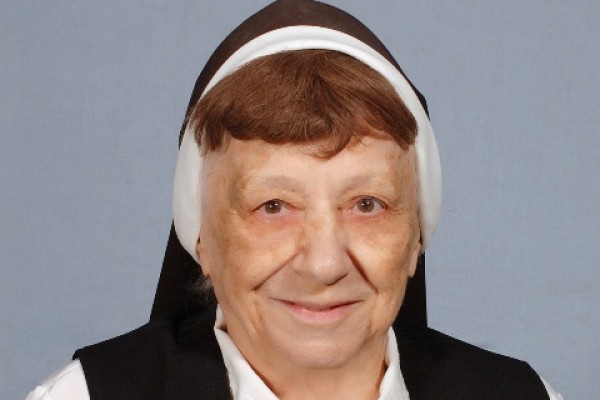 Anna was born on July 10, 1921, the fourth child of John and Anna Kobierowski. Her home was in the Port Richmond section of Philadelphia, where she and all her siblings attended St. Adalbert School. Anna and four of her sisters attended Nazareth Academy High School, also in Philadelphia.

Anna’s sister Eleanor entered the Sisters of the Holy Family of Nazareth in 1936, becoming Sr. Mary Elizabeth, and three years later, Anna also entered. John and Anna Kobierowski were generous with the Lord, giving a total of five of their daughters to His service.

Anna became a novice in 1940, receiving the name of Sr. Mary Raymond. She professed first vows in 1942 and final vows in 1947. When permission was given for Sisters to revert to Baptismal names, Sr. Raymond became Sr. Ann Rita, adding Saint Rita to her name.

Sr. Ann Rita was an accomplished artist. Her work included full size portraits of Jesus and the children, beautiful bulletin board displays in school, and illustrations for the book about Mother Foundress, Love Finds a Way, by Sr. Mary Michael Gecewicz. She was also a talented cook and baker. Her pies were legendary and were always in demand for bake sales.

It was not easy for Sr. Ann Rita to accept her increasing physical limitations. Despite the difficult transition in 2013 to the infirmary at Mount Nazareth, she remained positive. Her cheery disposition endeared her to her caregivers.

On December 12, she was placed on hospice. She was kept comfortable, and seemed at peace. On Sunday morning, December 17, as Mass was being broadcast on the television in her room, she passed away.

Her wake was held on December 21 at Mount Nazareth Chapel in Philadelphia, immediately followed by a Mass of Resurrection.