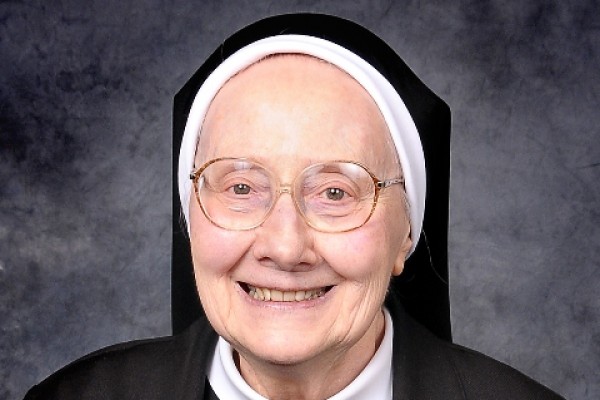 Sr. Christiana personified prayer. Jesus was always on her lips. Known for her smile and appreciative, loving nature, she prayed for and blessed everyone, especially priests, the world, and the souls in purgatory. At daily Mass and during the sisters’ community prayer, she always mentioned these intentions as well as the gifts and fruits of the Holy Spirit for those who did not have them.

On one occasion, when her teacher, a sister, invited a priest to speak to the class about vocations, Dolores experienced an inner calling to enter religious life. Her mother was especially happy but her dad did not want her traveling from North Dakota to Illinois alone. In time, he relented and gave his blessing. On March 4, 1946, she said good-bye to her family and with the grace of God, followed the Divine calling.

She professed her temporary vows in August 1949 and final vows in August 1955. She earned a teaching diploma and her certificate in theology from DeLourdes College in Des Plaines, IL in 1954.

She served in education ministry for twenty-four years in Chicago at Roseland, St. Josaphat, and Immaculate Heart of Mary Parishes; in Florida at St. Brendan’s; and, in North Dakota at St. Bernard and St. Vincent DePaul Parishes.

She also volunteered to assist in caring for the sick and suffering as a means of contributing to Christ’s mission to the Church. After her teaching ministry, Sr. Christiana spent 13 years caring for the sick at Nazarethville in Des Plaines, IL.  Eventually, she transferred to Texas where she served as a nurse’s aide in the convent’s infirmary. Through the years, Sr. Christiana continued serving the CSFN community in whatever capacity possible. Her love for the sick always found her praying with and for them, especially assisting those who were in their final stages of life.

During her last week, though unable to speak, Sr. Christiana was able to mouth the word “Jesus.” She passed away April 1 at Jesus the Good Shepherd Convent in Grand Prairie, TX. The Mass of Resurrection was celebrated April 4 at the convent’s chapel.