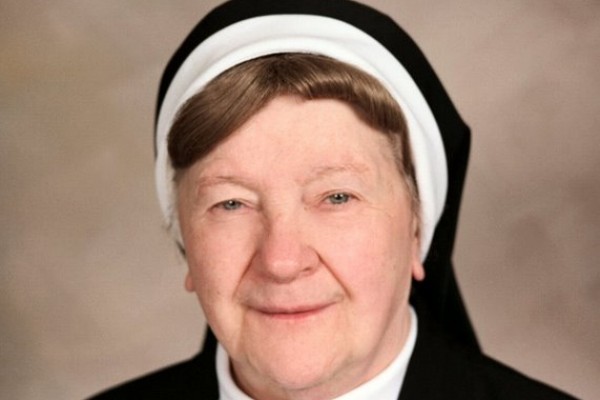 A native of Portland, ME, Jane Josephine Dobrowolska moved with her parents and three brothers to Brooklyn, NY, when she was 11. These were the days of the Depression, and years later, Sr. Theodore could recall standing in bread lines for food. Jane Josephine attended New York public schools, and credits her 7th-grade teacher for encouraging her to learn more about God and her faith. By age 16, Jane Josephine was attending daily mass. At age 17, she became a postulant of the Sisters of the Holy Family of Nazareth whom she met through Sts. Cyril & Methodius Parish in Brooklyn.

Sr. Theodore earned her bachelor’s in education from Villanova University, and began her teaching ministry, spending 44 years in parish classrooms in Utica, NY; Scranton, McAdoo and Philadelphia, PA; Ft. Lauderdale and Miami, FL, and Baltimore, MD.  In 1976, she resumed her own studies at Marywood University, earning a master’s in religious education.  This led to a new ministry in Baltimore as director of the RCIA program (Rite of Christian Initiation for Adults). This ministry and her continuing spiritual search led to her involvement with charismatic renewal and a variety of faith-sharing groups.

For 18 years of her life as a CSFN, Sr. Theodore served as local superior at convents including Nazareth Hospital, St. John Neumann Nursing Home, St. Hedwig’s and St. Anthony’s, all in the Philadelphia area.

In 1997, she retired to Mt. Nazareth, Philadelphia, first battling lymphoma and later recuperating from double-bypass surgery.  She continued to volunteer for the RCIA program at St. Christopher Parish. In her ministries and in her retirement, she was known as a sister who lived life to the fullest, in service to the Lord and his people.