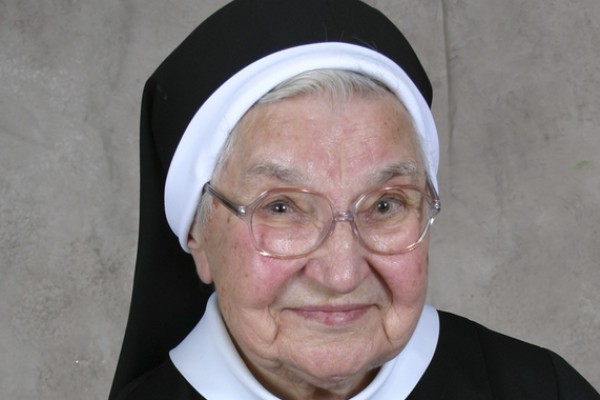 A native of Ansonia, CT, Mary Wozniak first met the Sisters of the Holy Family of Nazareth (CSFN) while attending St. Joseph School in Ansonia. Upon her graduation, she asked for and received her parents’ permission to attend the CSFNs’ Nazareth Academy High School in Philadelphia. Graduating in 1934, she received her postulant’s veil the same day. The name Victoria was given to her when she entered the novitiate.

Sr. Victoria’s teaching assignments took her from Brooklyn to Australia, with stops in between. She taught at St. Stanislaus School, Brooklyn; St. Adalbert, Elmhurst, NY; Colegio del Espiritu Santo in Puerto Rico, and from there, she went to Our Lady of Victory School, Bowen Hills, Australia.

Next, she was in Rome for four months at the Novitiate in Albano, Italy, preparing to become novice mistress in Australia. In December 1966, she returned to the U.S. Over the years, she returned to Brooklyn and Elmhurst for brief teaching assignments, and also served as principal and superior at Holy Trinity School in Utica, NY. She also returned to Rome, serving 10 years as local superior to the Generalate community. In 1985, she was back at to Monroe, overseeing maintenance on the provincial property.

Still active and traveling, Sr. Victoria subsequently served as superior at Villa Immaculata House of Prayer, Riverhead, NY; provincial councilor in Monroe; director of retirement at Monroe, and librarian at her elementary school ‘alma mater’ -- St. Joseph School, Ansonia, where she also worked with the Associates of the Holy Family. Her last active ministry was as librarian at St. Mary High School, Worcester, MA, retiring and returning to the provincialate in 2003.

Wherever she ministered, those who knew her considered Sr. Victoria happy, unassuming and content.  Until the final few weeks of her life, she remained active in the retirement community at Monroe. In her final days, she placed notes on various personal items with instructions for their distribution after her death. Her Missal, CSFN Constitution and various medals were marked with a note stating they should be placed in her coffin. Regarding the CSFN Covenant of Love, she wrote: "I have lived by this constitution and I would like to to be in my coffin when I die."