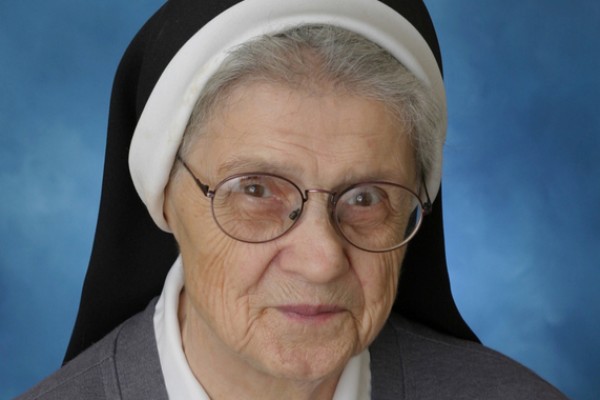 See, I make all things new!  (Rev. 21: 5)
This was one of the passages Sr. M. Richard Merman chose for her funeral liturgy; those who knew her say this passage was the underlying theme of her life.

A native of Cleveland, Casmira Merman left home to attend the CSFNs’ Mount Nazareth Academy in Pittsburgh, where she grew in love of God and the life of the sisters. She joined the community in 1930; at her acceptance to the novitiate, she took the name Richard.  She marveled at her vocation and God’s grace: “I am overwhelmed with God’s love, grateful for my vocation to religious life and amazed at God’s goodness.” Instead of following an early dream to become a Vaudeville dancer, Sr. Richard chose a life of dancing with the Lord.

She began her teaching career at St. Stanislaus Kostka in Pittsburgh, serving in the field of education until 1981, ministering in the dioceses of Detroit, Cleveland and Pittsburgh.

Next, she returned to Detroit, serving as principal of St. Barbara and Transfiguration schools.  In 1984, she began a new ministry, serving as parish minister at St. Christopher in Detroit.

A sister who lived with her recalls the stamina and energy with which Sr. Richard engaged in this ministry — re-organizing the Christian Service Group, initiating an annual Thanksgiving dinner for the home-bound and engaging the school children to make favors for this special occasion.

During these Detroit years, Sr. Richard joined other marchers on an eight-mile walk through the city to promote racial harmony and human rights, believing that acts of prayer and solidarity give witness to others that our God is a God who seeks justice for the poor.