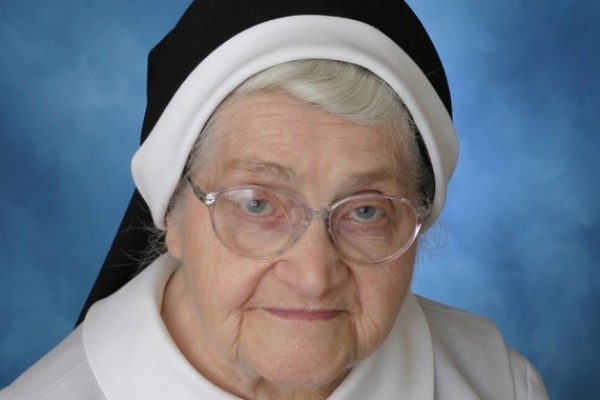 Helen Wojnar was the second of six children born to John and Victoria Szelc Wojnar, Polish immigrants who married in Pittsburgh. The family worshiped at Holy Family Church, though they lived some distance from the campus. Helen and her siblings attended the parish school, taught by Sisters of the Holy Family of Nazareth (CSFN). Helen joined the sisters as a postulant at age 15; she completed her high school education at Mt. Nazareth Academy in Pittsburgh.

Now Sr. Imelda, she taught for five years at St. Stanislaus in Cleveland. In 1935, when the CSFNs took over Mercy Hospital in Altoona, PA, the provincial administration asked her to be a member of the first class of the school of nursing at Mercy. At first, she declined, but because of the need for nurses, eventually she agreed. Sr. Imelda graduated from Mercy Hospital School of Nursing in 1938 and was immediately assigned to supervising the students. While nursing held no appeal for her, she found her niche in supervision. It "appealed to me best of all.  I was able to supervise. Like homemade soup - you did what you had to do, and if you understood a little bit about it, which I did..." things worked out.

In 1942, Sr. Imelda was assigned to Ohio Valley General Hospital in McKees Rocks, near Pittsburgh, where she was supervisor of nurses.  Throughout her career, Sr. Imelda had a great impact on the nurses she supervised and the patients whose care she oversaw.

In 1954, Sr. Imelda received her B.S. in Nursing from Duquesne University, Pittsburgh, and in 1969, she completed studies for an M.Ed., also at Duquesne. Sr. Imelda served as director of nurses in Mercy Hospital, Altoona, and as supervisor, assistant administrator of nurses and in central supply services at Ohio Valley General Hospital near Pittsburgh. From 1985 through her retirement in 2003, Sr. Imelda served as a nurse at Holy Family Manor, Pittsburgh.

She remained close to her family throughout her life and enjoyed frequent visits with family members in the Pittsburgh area.

For the last five years of her life, Sr. Imelda volunteered at Mt. Nazareth Learning Center, "next door" to Holy Family Manor. She left for the Center at 7 am daily, returning home in time for the Manor's 9 am Mass. Sr. Imelda apparently died in her sleep the morning of Sunday, Jan. 30, just a few months shy of her 99th birthday and in her 84th year as a member of the CSFNs. That Monday, a display in memory of her was set up near the entrance to the Learning Center, displaying the children's messages and drawings for Sr. Imelda.