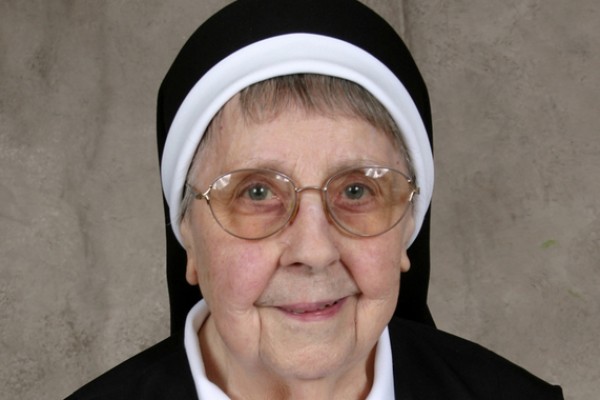 A native of Ansonia, CT, Josephine Wojnarowska was educated by the Sisters of the Holy Family of Nazareth, first at St. Joseph School in Ansonia and subsequently at Nazareth Academy High School in Philadelphia. She decided to join the CSFN community her senior year. Her older sister, Sr. David, had entered 13 years earlier.

Sr. Berchmans completed her teacher training at Holy Family Teacher Training School in Philadelphia, and earned a B.S. in education from Villanova University. In 1966, she earned her master's in Latin from Marywood college, Scranton, PA, with a thesis on "Latin in the Church Today," a particularly timely topic in the wake of Vatican II. Sr. Berchmans spent almost 60 years as a teacher and principal in both elementary and secondary schools. She taught at schools up and down the East Coast - in Pennsylvania, Maryland, New York, Connecticut and Massachusetts. One sister-colleague recalls the patience Sr. Berchmans displayed while teaching math to about 120 seventh-grade students. Sr. Berchmans was known for her tough standards and her patience and kindness.

When Immaculate Heart of Mary Province was established in Monroe, CT, in 1959, both Srs. Berchmans and David were part of the new province. Sr. Berchmans often related that she was only two when Sr. David left for the convent. "Can you Imagine, I had to come to the convent to get to know my own sister?" she was known to say.

Sr. Berchmans remained close to her family throughout her convent life; in later years, she enjoyed shopping with a niece and bringing surprises home to the sisters. Sr. Berchmans died in the wake of the autumn northeaster that turned Marian Heights into an early winter wonderland.