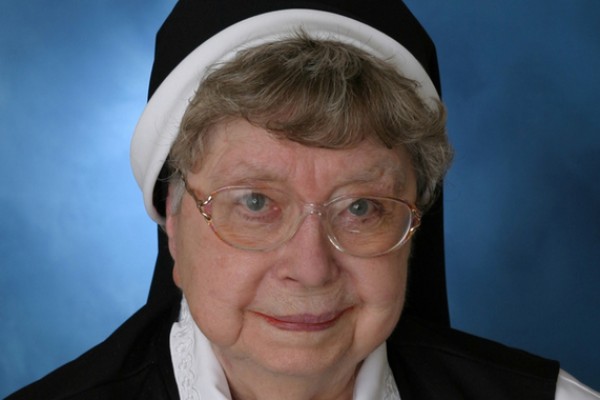 In 1940, she smuggled the story of St. Faustina Kowalska and the devotion to the Divine Mercy -- written on silk and sewn into the lining of her voluminous habit -- from Nazi-occupied Vilnius to Rome.

Sr. M. Estelle (Cecilia) Pruszynski, a member of the Sisters of the Holy Family of Nazareth for 81 years, died Nov. 30, 2011, at age 97. She was a resident of Holy Family Manor in Ross Township, Pittsburgh.

A native of Pittsburgh who attended Holy Family Parish in the Lawrenceville section of the city, Cecilia Pryszynski joined the CSFNs on Aug. 31, 1930. She spent her novitiate with the CSFNs in Italy, then studied and taught in Poland and Lithuania before returning to the U.S. after the start of World War II.

Although Sr. Estelle was one of at least two people asked to carry the story of Sr. Faustina Kowalska and the devotion to the Divine Mercy to Rome, it seems she may never have met Sr. Faustina, who died in 1938 from tuberculosis. Stationed in Vilnius, then part of Nazi-occupied Poland, Sr. Estelle was planning to leave for Paris in 1940.  She and other American sisters had been asked to go to Paris or Rome after war broke out in 1939.

Before leaving Vilnius, Sr. Estelle visited the Ostra Brama gate to the city, where Divine Mercy Sunday had first been observed in 1935.* That year, Sr. Faustina's spiritual advisor, Fr. Michael Sopocko, had had the image of Divine Mercy displayed over the famous gate and "preached the message of mercy" to those gathered in a nearby church.* In 1940, this image was ensconced at that same church.

Sr. Estelle had spoken with Fr. Sopocko over the years, learning of the message of Divine Mercy relayed to Sr. Faustina. On this "farewell visit" to the gate, Sr. Estelle ran into Fr. Sopocko again; they began talking and prayed together at the nearby church. He asked if she would change her plans and travel to Rome to deliver the story of Sr. Faustina and the Divine Mercy to officials in the Vatican. He wrote the story of the apparitions on a foot-wide piece of silk because that material was the lightest possible.** Sr. Estelle then sewed the silk into a wide lining ending in the hem of her habit.

It took Sr. Estelle three days and nights to travel through Nazi territory to Rome. Her travel papers, in CSFN files in Pittsburgh, were stamped with the Nazi swastika for her 1939 trip to Rome to profess her final vows. For this 1940 journey to Rome, her superiors in Rome told Sr. Estelle to contact the local Red Cross at every stop her train made, to notify the Sisters in Rome of Sr. Estelle's location. If any problems arose, they would know her most recent location.

Sr. Estelle was one of at least two people who were asked to bring the story of Sr. Faustina and the Divine Mercy to Rome. The other known carrier of the message of Divine Mercy was a priest.  It is not known if he and the message reached Rome.

Arriving in Rome, Sr. Estelle gave the message about Divine Mercy to Mother Lauretta Lubowidzka, CSFN, who in turn, delivered it to Vatican authorities. Over the years, devotion to the Divine Mercy of God spread beyond Poland and across the world.  Pope John Paul II canonized Sr. Faustina on Divine Mercy Sunday 2000; today the first Sunday after Easter is observed by the Church as "the Second Sunday of Easter, or of Divine Mercy."

After her return to the States in 1940, Sr. Estelle taught at the upper elementary and high-school levels at schools in Pennsylvania, Ohio and Michigan. She is survived by a sister-in-law, Beatrice Pruszynski of Pittsburgh, nephew John Pruszynski, also of Pittsburgh, and many other nieces and nephews.

*Sources: http://www.marian.org/shrine, the web site of the Marian Fathers of the Immaculate Conception, Stockbridge, MA.  From articles by Robert Stackpole, first published in Spirituality, Dublin, Ireland, 2001.

** February 2003: "A Brief Account: The Journey of the Message of the Devotion to the Mercy of God," as related by Sr. Estelle Pruszynski, CSFN, to Sr. Rose Mary Modzelewski, CSFN.