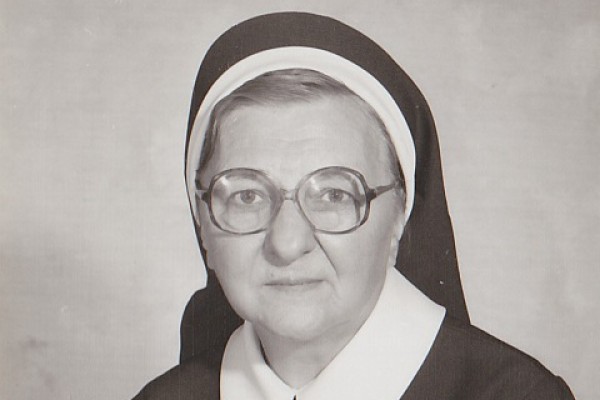 The oldest of eight children and a native of Worcester, MA, Sr. Olimpia - Helen Nowakowska attended Nazareth Academy High School in Philadelphia, joining the CSFNs while a student.  She entered the novitiate in Des Plaines, IL, making her first vows there in 1929.  Sr. Olimpia professed her perpetual vows in Rome in 1935, after preparing at the CSFN novitiate in Albano, Italy.

After completing her novitiate in Des Plaines, Sr. Olimpia became a member of the new Immaculate Conception Province established in Philadelphia.  She taught in Philadelphia and Brooklyn before being sent to Europe to prepare for her final vows and then to study at Jagellonian University in Krakow.  She spent another three years in Europe, undoubtedly affected by the winds of war that were brewing while she was a student.

Returning to the States in 1938, she resumed her studies, earning a BA in education from Villanova University, Philadelphia, in 1940.  Decades later, she was awarded her master’s in Latin, English and Library Studies, also from Villanova.  A language and library scholar, Sr. Olimpia taught at schools in Philadelphia; Utica, NY; Long Island and Brooklyn, NY; Connecticut; New Jersey, and her alma mater, St. Mary’s Grade School at Our Lady of Czestochowa Parish in Worcester, MA.  “Sister O,” as her students called her, was known as a dedicated, no-nonsense teacher with a creative streak she shared with her students.  For example, at Holy Trinity School in Utica, NY, she taught as many as 180 students the art of making butter lambs for Easter.

In addition to teaching, Sr. Olimpia also served as vocation director for a short time, and as principal and local superior at some parishes where she taught.  She established libraries at the schools and at Villa Immaculata House of Prayer in Riverhead, NY, while she ministered there.  Sr. Olimpia ‘retired’ to the then Immaculate Heart of Mary Provincialate in Monroe, CT, in 1983.  She managed the gift shop there until her final retirement at age 91 in 2002.  Her creativity found expression in in the gardens at the House of Prayer and at the Monroe gift shop, where her crafts and surprise packages were featured items.  She delighted in the newspaper’s daily crossword puzzle, and was always happy to find someone who shared this activity.

In her later years, confined to her room at the convent in Monroe, Sr. Olimpia had these words on her wall: To love and to be loved is the greatest joy in the world.