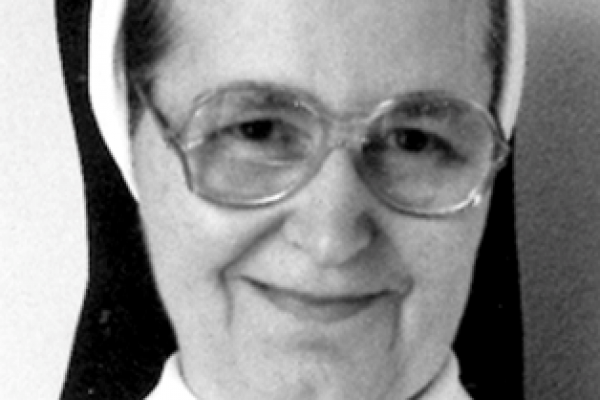 A Chicago native and a proud Texan, Sr. Benigna (Evelyn) Gadzinski joined the Sisters of the Holy Family of Nazareth (CSFN) in 1946 in Des Plaines, IL. A graduate of Holy Family Academy, Chicago, she held a BS in education from Loyola University and spent 17 years teaching at parish schools in the Chicago area. She served as the Director of Postulants, assistant to the Director of Novices, other administrative positions in the Congregation and in administrative roles for a variety of healthcare facilities.

From 1974-82, Sr. Benigna was the Superior of the Texas Vice Province and chairperson of the governing boards of Bethania and Mother Frances Hospitals. From 1983-92, she was the local superior at Grand Prairie, TX, and a member of the board of Bethania Hospital. In 1992, after completing her term as chairperson, Sr. Benigna moved to Tyler, TX, serving in the Utilization Office of Care Management at Trinity Mother Frances. One year later, she became superior of the St. Frances of Rome Convent. In 2001, she returned to Grand Prairie to serve as local superior there. Later that year, she became ill and was bedridden until her death on Aug. 26 at age 88 after 66 years in community.

Sr. Benigna was proud of being from Texas. Before Karol Wojtyla was elected Pope in 1978, Sr. Benigna met the then cardinal in Krakow. When others asked her about meeting Cardinal Wojtyla, she responded with pride: “I told him that I was from Texas. He seemed to take note of where I was from. Most people from Eastern European countries seem to be impressed when you’re from Texas because it’s such a large state.”

Years later, when celebrating her golden jubilee, Sr. Benigna said her time in Nazareth had been a manifestation of God’s hundredfold. She was particularly grateful for Nazareth’s Eucharistic devotion and for the rhythm of community life with sisters whom she loved and who loved her in return. She was loved and deeply appreciated by the sisters who often said that Sr. Benigna walked through daily life, planting the seeds of love, kindness and compassion.

Among the many testimonials to Sr. Benigna after her death was this:

You are the one from whom I tried to learn how to ‘love tenderly and walk humbly with God.’