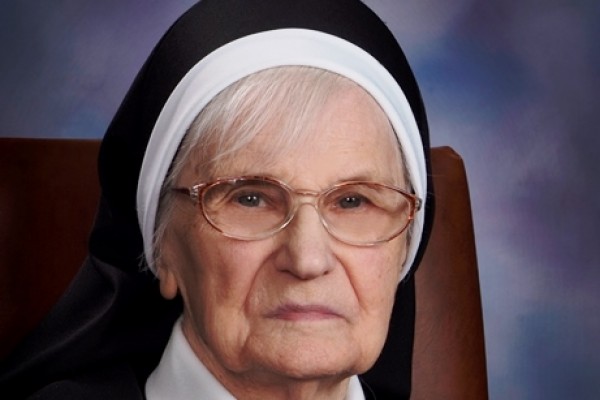 A native of Philadelphia, Sr. Benedict - Genevieve Jaskiewicz was the oldest of eight children who grew up in the Allegheny section of the city. Genevieve graduated from Nazareth Academy Grade School and the Academy High School, deciding after graduation to become an aspirant of the CSFNs who had been her teachers. Throughout Genevieve’s 97 years, the family remained close, loving and faith-filled.

In August 1936, Genevieve entered the novitiate and became Sr. Mary Benedict. She was known for her academic prowess, strong intelligence and interest in the sciences. She even took a class from famed scientist Alfred Einstein, so the story goes. He put a problem on the blackboard and challenged his seminar students to solve it. Sr. Benedict was the only one to do so. After the class, Dr. Einstein reportedly offered her the opportunity to work with him. Thought she was unable to accept his offer, it must have been satisfying to know this American genius recognized her own abilities.

She attended George Washington University for a year and earned her BS in Secondary Education from chestnut Hill College in 1945. In 1952, she earned an MA in Social Studies with a concentration in Church History from Villanova University. Sr. Benedict was known as a great educator, particularly in chemistry. She taught in elementary schools in Queens and Brooklyn, NY; Philadelphia and McAdoo, PA; New Haven and Stratford, CT, and in Worcester, MA, with stints at high schools in Philadelphia and Worcester. She also served as a principal in Philadelphia and Queens. Those who knew Sr. Benedict as a teacher, including one of her own sisters, say that she was able to teach anyone. She had good rapport with her students and inspired many to follow her example, studying the sciences. Meanwhile, she also stayed after school and taught those interested how to sew.

In addition to her teaching ministry, Sr. Benedict held leadership positions in as convent superior in New Haven, Ozone Park and Worcester; she also served as provincial superior at the then Immaculate Heart of Mary Province in Monroe, CT, and was chosen several times as a delegate to General Chapters in Rome. When her term as provincial superior came to a close, Sr. Benedict became supervisor for building and grounds in Monroe. She officially retired in 2002 at age 86, continuing to reside at the Monroe convent.

In her retirement, she suffered from dementia, but seemed to accept this new and difficult chapter with grace and humor. When reminded of the days when she served as a superior, she would response, “We had fun then, didn’t we?” She always thanked those who helped her in whatever small way. She died during Holy Week 2013, knowing and living what Jesus taught: “Unless you become like little children, you shall not enter the Kingdom of Heaven.” (Matt 18: 3)