The beginnings of the Association of the Holy Family in the U.S.: Sr. Rita Partyka honored in Philadelphia 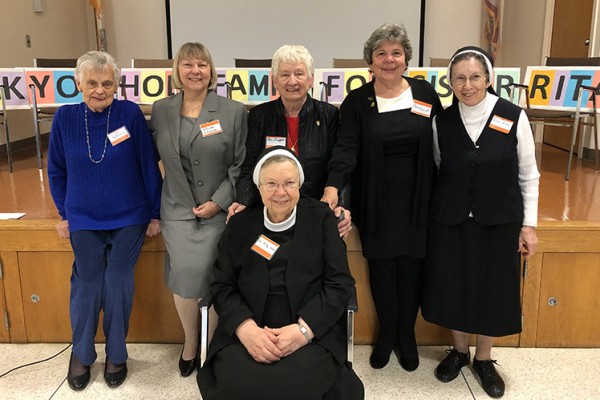 Forty years ago, in Meadowbrook, PA, Sr. Rita Partyka led four women who came to the novitiate to pray. Those women, under the direction of Sr. Rita, would later become the first Associates of the Holy Family in the U.S.

To honor that momentous occasion, our associates recently honored Sr. Rita at their annual meeting in Philadelphia. Amid joyful tears and laughter, associate groups from around the Mid-Atlantic area expressed their gratitude for Sr. Rita’s support through the years. According to Sr. Virginia Rozich, Sr. Rita “was moved so many times by the expressions of love and appreciation.” Sr. Susan Therese Rojek added, “Sr. Rita was honored in such a way as deserving of someone truly dedicated totally to our community, the legacy of our blessed Foundress, and holiness of our Associates.”

Villa Nazareth, the Novitiate of the Immaculate Conception Province, was situated on a beautiful piece of land in a suburb of Montgomery County, Meadowbrook, Pennsylvania. As the numbers of vocations had decreased, the sisters had become more and more concerned about the Congregation's ability to maintain the large property and utilize it most effectively for the glory of God. In 1978, this concern prompted the Superior and Directress of Novices, Sister M. Rita Partyka, to initiate daily intercessory prayer ''that Villa Nazareth may be a special house of prayer for Nazareth and others." As the sisters and novices in Villa Nazareth prayed, two women of faith were likewise praying for the Spirit's direction in their lives, neither one knowing the other was doing the same. They were Maria Delaney and Eva Rutecki - housewives, mothers and parishioners of St. Albert the Great parish-seeking to fulfill the spiritual and corporal works of mercy within their families and within their Church/parish. Both women, unbeknown to each other, had the same spiritual yearning for "something more."

Maria, visiting the then Novitiate chaplain, Revered Edward B. Cahill, observed the atmosphere of God's presence in the nature of the grounds. She had never been in the chapel or any part of the house except the parlor. Maria asked Father Cahill if she might come back to the Villa to pray at length. Father Cahill, hearing the sisters' daily morning petition to the Foundress, gave Maria the superior's name and telephone number. The next morning Maria called and, within a short time, other calls came with the request to come for a day of prayer. And so it happened: four pioneers - Maria and Eva with Joanne O'Donnell and Maryann Blatz - were to encounter the God that Mary of Jesus the Good Shepherd proclaimed.

Arrangements were made and the women met with Sister Rita. To acquaint them with the necessary and useful facilities of the Novitiate, Sister Rita toured them through the first floor and the basement meeting hall. As they stood in awe and adoration at the entrance of the chapel, the rose window of the Holy Family above the altar captivated their spirits. The portrait of a woman in habit in the dining room provoked eager inquiries. It was the picture of the Foundress. As details of the life of the Foundress and of the history of the Congregation flowed freely from Sister, the desire to respond to a unique calling from the Lord came spontaneously from these women in their thirties and forties. It was "love at first sight" - the conception of F.I.A.T. (Family life In Action and Truth) as the Association was first called (later "FIAT" taking on and enhancing the whole Incarnational Mystery of the "Yes" of Jesus, Mary, and Joseph).

The first meeting of prayer was set for the Monday after Pope John Paul II's visit to the United States, October 8, 1979. Mary of Nazareth, to whom the women had great devotion, blessed the little group. Maria and Eva shared their previous experience investigating a number of associate programs or ''third orders." None had satisfied; none seemed right. Yet, now something was different. They felt so at home. All four women manifested an unusual strong desire for devotion to the Eucharist, for honoring the Blessed Mother, for knowing more about Mary of Jesus the Good Shepherd, and for making a special place for the Holy Family in their lives. More days of prayer were requested. Maria and Eva continued to share their dreams, hopes, and desires with Sister Rita. As the group began to meet monthly, prayer laid the foundation for discernment of a common purpose. The monthly meetings incorporated adoration before the Blessed Sacrament, shared prayer, and discussions of His Will Alone and Where There Is Love. The lay women, under the guidance of Sister Rita, studied appropriate sections of the Acts of the Fifteenth General Chapter and the Constitutions of 1887. As other women began to request days of prayer, another group was formed. One of the groups met during the day (the first Monday of each month 9:30am - 2:30pm) and the other in the evening (the third Monday of each month 7:30pm- 10:00pm) to accommodate their family schedules. By February 4, 1980, six others had joined. From Mother Mary's writings, her charism, and the lived experience of her sisters, guidelines for the development of the Association of the Holy Family began to emerge. Informal leaflets were prepared announcing the prayer group meetings.

On March 8, 1980, at the Mother Foundress Festival, Sister Rita, asked the sisters of the Province for the support of their prayers as she shared with them details about this budding extension of Nazareth, the potential Association of the Holy Family. When on March 10, 1980, Sister gave the same presentation to the prayer group at Villa Nazareth, the group expressed the desire for a business meeting to clarify purpose and direction and to record group ideals and hopes for the written report requested by Sister M. Celeste Slowik, Provincial Superior.

Models from other religious communities were considered. A number of sources were studied. By the end· of the month, preliminary guidelines for the Association were drafted. Since the Church had granted approbation to begin a lay association in 1942 to the then Superior General, Mother M. Lauretta, the Provincial Superior of the Immaculate Conception, Sister M. Celeste Slowik, sought the approval of the local ordinary. The Most Reverend Martin Lohmuller, D.D., J.C.D., Auxiliary Bishop of Philadelphia, granted permission that same month and blessed the undertaking. He cautioned, however, that the Association be not established as a fund raising organization, and that its foremost and primary focus be on prayer and the spiritual growth of its members.

By the feast of the Annunciation, March 25, 1980, Maria and Eva, co-founders of FIAT, and their two early companions, Joanne and Maryann, committed themselves in an informal prayer service and in the presence of the Provincial Superior, Sister M. Celeste Slowik, and the FIAT Director, Sister M. Rita Partyka, to extend the Kingdom of Love in their own families, parish, archdiocese, neighborhood, and even the universal Church in so far as their hands and prayerful hearts could reach. A chain and medal of the Holy Family and a certificate of membership were given as an external sign of their commitment. Thus, the Association of the Holy Family of the Immaculate Conception Province was born.

Interested in how you can become an Associate of the Holy Family? Please visit our Association page.