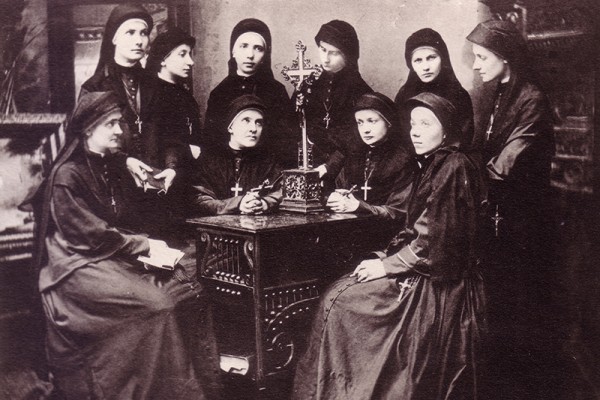 It was Independence Day 1885 when 11 of our sisters, along with our foundress Blessed Mary of Jesus the Good Shepherd (Frances Siedliska), arrived at New York Harbor, having made a treacherous transatlantic crossing. That evening, they boarded the train for a two-day, cross-country journey to serve Polish immigrants, answering a call to serve, teach, and care for immigrant children and their families.

On July 4, 2020, we celebrate the 135th anniversary of our sisters arriving in the U.S. In recognition of this milestone and to reflect on our beginnings in this country, we would like to share with you an excerpt from Out of Nazareth, by Sr. M. DeChantal, CSFN, and a passage from our foundress’ diary in which see envisioned our ministries in the U.S.

Today, we continue to pray for and serve families, both those who have spent countless generations on this land and those who are immigrants seeking a different, and, hopefully, better life.

[Pope] Leo XIII looked with solicitude and admiration to the young American republic making enormous strides in national and economic progress ... To safeguard the religious faith of the Catholic community, the Church acknowledged its ecumenical responsibility towards all the faithful.

At the invitation of the Sovereign Pontiff a conference of American archbishops was held in Rome from October, 1883 to March, 1884 to discuss the affairs of the Church in the United States. Meeting at the College of the Propaganda of the Faith under the presidency of the prefect, Giovanni Cardinal Simeoni, the prelates carefully considered the exigencies of the American pluralistic society in the process of urban and industrial expansion, flanked as it was by the phenomenal rural life, and also the urgency to preserve Christian truth and morality among the people.

The result was the convening of the Third Plenary Council in Baltimore, November 9, 1884. The Pope appointed the Archbishop of Baltimore, James Gibbons, to represent him as the Apostolic Delegate and to preside at the Council. Among the far-reaching measures adopted by the Council, parochial schools became mandatory upon the clergy and the faithful for the religious education of both native and immigrant children. Since a large percentage of immigrants came from countries where English was not spoken, the bishops formulated the policy of assigning priests of the same ethnic background as their congregations, who knew their language and who would be in touch with the spirit and the aspirations of their people ... Just then religion was of prime concern and its ends had to be pursued with judicious propriety.

While the agenda for the Third Plenary Council was being readied, there came to Father (Anthony) Lechert an appeal from a Resurrectionist confrere in Chicago, Father Vincent Barzynski, dated October 13, 1884, pressing for European Sisters to staff a school and an orphanage ... The city was throbbing with prodigious vitality in a spectacular rise from the wreckage after the Great Fire of 1871; the demolition had left homeless nearly one third of the inhabitants and destroyed almost the entire commercial area. Chicago emerged briskly, dotted with cultural islands populated by groups of common origin – a veritable cosmorama of languages and customs…

In his request to Father Lechert, [Father Barzynski] minced no words citing the qualifications he expected of the sisters: they had to be "religious according to the Heart of God,'' “equipped with above-average education," "self-sacrificing," "valiant women, willing to lake their stand with Mary beneath the cross of Christ." He added as an afterthought his "fear of costly experiments of worldly­minded religious, who would be incapable of salutary influence upon our families and our women.”

Later, in February of 1885, Archbishop Patrick A. Feehan of Chicago addressed himself directly to Mother Mary [Frances Siedliska], urging her to send the sisters by the month of July. He relied heavily on religious orders with a foreign-language… pool to help implement the pastoral decrees of the Plenary Council. For weeks, during her hours of solitary prayer, Mother Mary came to grips with God and herself, weighing the probabilities of the American venture. The call of the Church to a participation in the redemptive service of souls induced her to exchange the familiar amenities of European life patterns for the great unknown.

On January 11, 1885, our foundress went to the Basilica of St. Mary Major in Rome to pray, and recorded the following in her diary:

"Here at the crib, I envisioned America so clearly, taking root in the spirit of the Holy Family, a spirit of love and of the freedom of the children of God. It seemed clear to me that Jesus willed to transport our work even there, so far away. There is no love without sacrifice, but it is a pleasant one for us, a very happy one because it is for Jesus. It consists in a separation without the hope of meeting again here below. Here the sacrifice hinges on the Kingdom of God within us through accomplishing His purpose and expanding His kingdom. There, at His crib l submitted myself and my beloved sisters."

Photo: Mother Foundress with some of the early sisters in the U.S.