A heart with no boundaries 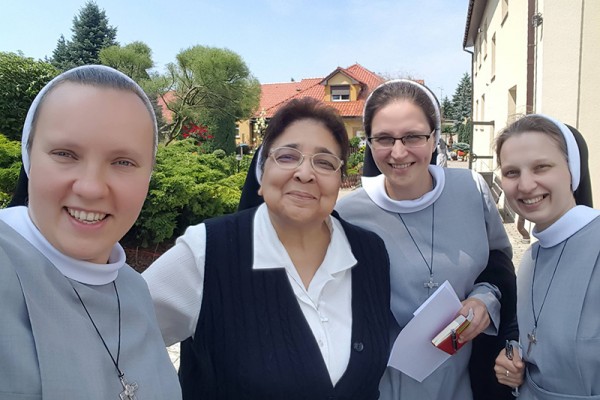 It happened in 1975. Srs. Angela Cresswell, African American /Cherokee Indian, and Marixsa Ochoa Puerto Rican were standing in the lower church of the Basilica of the National Shrine of the Immaculate Conception in Washington, DC. Reveling in the excitement of the Congregation's 100th anniversary, the greetings among sisters and guests flowed freely. Approaching the two junior sisters, their former novice director, pretended to be a stranger. "And how did you two come to join a Polish Congregation?" Their faces registering momentary surprise, the two sisters turned to Sr. Margaret Mary and responded simultaneously, "We didn't know it was Polish!" This unanticipated retort brought instantaneous laughter to the three. Granted, this was not exactly true, but the reality was that Nazareth's cultural roots presented no obstacle for two of its minority members.

Certainly, every religious founder has an ethnic background. Ah ... but our foundress was indeed unique. As Jesus did not deem equality with God something to be grasped at, Frances Siedliska did not deem her Polish heritage something to be grasped - at least to the extent of excluding other cultures. Like Jesus, there was no room in her heart for racial discrimination.

The 19th century was not friendly to African Americans and Native Americans in the United States. Yet Mother Mary of Jesus the Good Shepherd [Frances Siedliska] along with her contemporary and successor, Sr. Lauretta, not only rescued some of America's most despised from orphanages, but welcomed them into the Congregation. Stella Charleston, multiracial; Laureta Brahland, Native American; Julia Dorsey and Alma Mosely, both multiracial, were four minorities, among the pioneers in Nazareth America.

Adopted, raised, and educated among the Sisters, they accompanied Mother Mary of Jesus the Good Shepherd [Frances Siedliska] or Sr. Lauretta to Europe at an early age. Each of these Sisters, with the exception of Julia, lived in Poland, France, and Italy, becoming fluent in one or more of these languages in addition to their native English. Imbued with Mother Mary's own love for God, Nazareth became a permanent home for these courageous women.

Nazareth opened its doors to its first person of color in 1898 with the entrance of Sr. Mary Ann (Stella/Grace Charleston). Srs. Priscilla (Laureta), Ismaela (Julia), and Miriam (Alma) followed in 1908, 1914, and 1916 respectively. Sr. Mary Ann remained in Europe, enduring the horrors of a concentration camp during World War II before living out her final clays in Italy where she died in 1963 and was buried at the Generalate. Sr. Priscilla died in New Mexico from tuberculosis in 1931, where it was hoped the climate would restore her failing health. Sr. Ismaela, daughter of a Polish mother and black father, lived her vowed commitment until 1963, when she died in Chicago. Sr. Miriam, who loved Sr. Lauretta profoundly and was present at her death in Rome, would finally end her days in Philadelphia in 1965, where she is buried in the cemetery of the former provincial grounds.

Two years after Sr. Miriam's death, I met an African-American Nazareth religious, Sr. Robert LaRochester. As is true of her predecessors, she is blessed with a mixed heritage--French Creole and Choctaw Indian. She too, was no stranger to the Congregation having been taught at St. Peter Claver's in Brooklyn, NY and Little Flower in Wading River, NY, before entering Nazareth in 1955. Teacher, house mother, school nurse, director of choral singing at St. Mary's Home in Ambler, and cellist in the Sisters' Orchestra, Sr. Robert generously shared her talents. Eventually, resuming her baptismal name, Sr. Barbara Jean trained for and worked as an X-ray technician at Nazareth Hospital, in Philadelphia. This deeply spiritual woman guided my earliest steps to Nazareth, making it clear to me from the beginning that I must remember that Jesus was the reason I was coming and the reason I would stay. In 1972, Sr. Barbara Jean responded to the Lord's call to continue living the consecrated life as a contemplative and she carried her Nazareth heart to Baltimore Carmel.

Three other multiracial children claimed Nazareth as the home of their childhood during the early days of Nazareth in America -- Yolande Charleston, sister of Stella/Grace; Jolanta, and Grace Black, renamed Mary Antonina, of Boston. Although these three did not enter the Congregation, we know that Yolande returned from Poland in 1910, married, and had several children; the last remaining sibling, Frances Laureta, resided at Nazarethville nursing home in Des Plaines, IL, until her death in 2010.

I'm intrigued and deeply touched as I read the necrologies of my four soul-sisters. I suspect my life as an ethnic minority in Nazareth bears ginormous differences to theirs despite our commonalities --- a native of Chicago, a musician, and linguist. I imagine when we meet in Heaven I won't be a bit surprised to learn that they have kept a prayerful watch over me these past 50 years. Witnesses during their life-time relate that they never forgot their people.

The legacy of a heart without borders continues to permeate the Congregation of Mother Mary of Jesus [Blessed Mary of Jesus the Good Shepherd (Frances Siedliska)]. I imagine her smiling in welcome to those daughters coming from many different cultures who have found family in her Nazareth: Vietnam, Syria, Ghana, Trinidad, Philippines, Puerto Rico, Italy, Belarus, and Australia. "So how did we come to join a Polish Congregation?" Simple. We are practicing for life in Heaven, where hearts are pure and Love admits no borders.

Sr. Angela Cresswell originally wrote this reflection in 2010 for the 125th anniversary of the Sisters of the Holy Family of Nazareth arriving in the U.S.