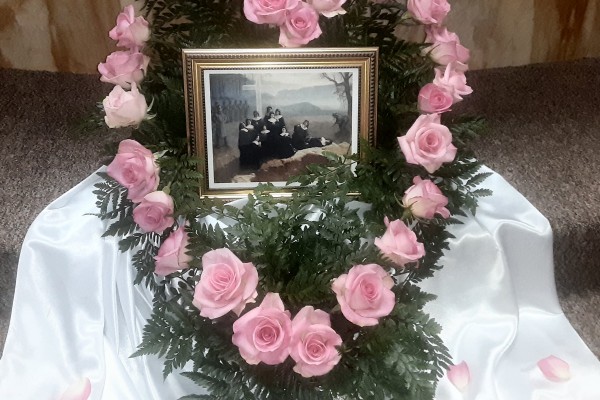 I am writing this reflection on the eve of August 1, 2021. It is the 78th anniversary of the martyrdom of Blessed Stella and her 10 Companions. On that morning in 1943, Sr. M. Stella (Adela) Mardosewicz, CSFN, and her 10 companion CSFN sisters, were executed by the Nazi regime and buried in a common grave outside Nowogródek, then in Nazi-occupied Poland, now part of Belarus. Many thoughts went through my mind during the day as I thought of the sacrifice each one of them made for the families of Nowogródek.

I then read a letter from our Provincial superior which let us know that on Wednesday, August 4, the Sisters in Des Plaines would be welcoming our four postulants to their new home for the next two years. On August 8, they will enter the canonical year of their Novitiate. It made me think of the sacrifices they were making. Of course, not quite the same, but there I am sure there were challenges that each had to face to reach this point of their life.

Why share this with you in a reflection? I thought it was important, especially during our challenging times. I re-read a piece by Macrina Wiederkehr I had been saving to send to them. Part of it says “Life unfolds a petal at a time, slowly. The beauty of the process is crippled when I try to hurry growth. Life has its inner rhythm which must be respected. It cannot be rushed or hurried… life unfolds slowly a petal at a time, like a flower opening to the Sun, slowly. A disciple is not made in a hurry. Slowly I become like the One to whom I am listening.” There is more, but I especially love the line that says ‘a disciple is not made in a hurry.

These women who are entering our community and the blessed Martyrs of Nowogródek had one thing in common: they were and are working on being followers of Jesus. Each one made decisions that changed their lives. What about us? We are coming out of some difficult times during the pandemic and experiencing our reentry into ‘back to normal’. Have we grown during that time, and are we willing to look at what lies ahead with new eyes? Has our life opened one petal at a time, allowing God’s grace to enter in and recreate us?

I am not sure, for I have experienced many people whose choices seem to be rash, angry, and wanting what they want, when, and how they want it. We live in a world where we need one another, and I think we may have forgotten how to be kind. What about the other person? Am I willing to give so someone else may have? The women I spoke of above were and are willing to do so. I also truly believe there are families and individuals who at this time are being patient with the petals of life unfolding.

During the week take some time to look at the petals of your life and their unfolding. Celebrate the growth which has been filled with beauty and delight as well as tears and heartaches and graces. Have a blessed week. May our Martyred Sisters give you the strength to become the best disciple you can be!