My Escapades In Nazareth 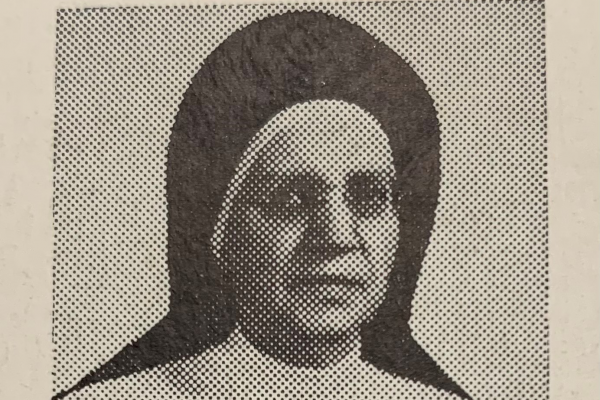 Editor’s Note: Sr. Mary Simplicia of the Cross (Marian Lawecka – died July 18, 1963) was one of the very few who had the good fortune of meeting our Foundress, Blessed Mary of Jesus the Good Shepherd (Frances Siedliska). During a visit with her eldest sister, Sr. Pancratius, who was then a postulant at the Precious Blood Convent in Pittsburg, little Marian first encountered Blessed Mary of Jesus the Good Shepherd who spoke with her. Marian soon followed her sister to Nazareth taking on the name Sr. M. Simplicia of the Cross. Several years later, their two younger sisters Sr. Laura and Sr. Marinelle joined the community, making them the first “Nazareth Quartet” in the history of the Congregation.

The following excerpt comes from Sr. Simplicia’s “My Escapades In Nazareth” a compilation of stories written from the time she was a boarder attending Holy Family Academy in Chicago. She writes, “So it was during the time of Mother Lauretta’s time in the Academy in Chicago that I had all kinds of adventures, more than any other of the girls…I was of a very lively disposition and God endowed me with a brilliant memory, that made me useful at times, but also at times prone to mischief as one can see from the following ‘Escapades’…Enjoy reading and have a good hearty laugh, which is so beneficial to health.”

My Escapades in Nazareth

By Sr. M. Simplicia of the Cross

Since there was no Polish High School in Pittsburgh, at the suggestion of Sister M. Pancratius (my oldest sister) who was already a professed sister, I was sent to attend the Holy Family Academy in Chicago where she was stationed alongside Rev. Mother M. Lauretta, Provincial Superior of America.

The Provincial Councils were usually held on Saturdays because the Councilors were the Superiors from different homes, and on these Saturdays, a big card with the word "Rada" (Council) was hanging on Mother Provincial's door. We were told before time not to pass that corridor going up because the footsteps resounded in Mother's room. Instead, we were to use the stairs on the other side of the building.

It just happened that I was in a hurry, as usual, running up the forbidden stairway. To my great embarrassment, there stood Mother Provincial at the post on the second floor. Now, surely, I will get the penance for being disobedient, and one could imagine my relief when Mother said, "How good that you came here for I have been waiting quite a while for someone to go for Mr. Kiolbassa and ask him kindly to come to the Academy, right now." Overjoyed that there was no penance for such disobedience, truly, I did not hear exactly what Mother was saying; all I heard was "Kiolbassa" –so I ran as quickly as I could through the alleys to Noble Street to our butcher. The store was full of women buying meat for Sunday. Knowing that Mother is in a hurry, I asked Mr. Pstrong, the butcher, to wait on me because Mother sent me for sausage. Surprised, Mr. Pstrong stopped his job, looked at me searchingly, and asked, "For whom does Mother want the sausages? You people don't eat meat on Saturdays." So, I answered, "I know, but there is a Council today, so I think those Councilors will eat meat." Then he asked, "What kind of sausages does Mother want?" Naturally, I did not know what kind, so I answered hesitantly, "Perhaps the same as usual." The butcher said, "Sr. Monica, the cook, always takes the frankfurters for Sunday supper." So I said, "Then, please give me the frankfurters." But the butcher had one more question to ask, "How many pounds of these do you want?" Well, that was the limit! All these questions and I am in a hurry, so again I said, "I think the same as always!" Mr. Pstrong replied, "Sr. Monica always buys 10lbs of these sausages." I interrupted him impatiently, "Please hurry and give me 10lbs because I am to hurry up since Mother is waiting." Mr. Pstrong weighed the 10lbs of sausages, wrapped them up, and called his son Bruno, a college boy, and said, "Carry this to the Academy. It is too heavy for her." Our interesting dialogue, gave a good laugh to all who were in the store.

At the Academy door, I took the heavy bundle, thanked Bruno, and ran down to the kitchen. According to the Rule, no one was allowed to enter the kitchen, so I threw the heavy package on the windowsill on the kitchen door and hollered, "Sr. Monica! Sausages!" She looked at me questioningly and asked, "Why meat today? This is Saturday!" My only answer was, "I don't know. Mother told me to bring it, so here it is!" I then ran upstairs, again on the same forbidden stairs, and Mother was standing at the post as I left her. "Already?" "Yes, Mother, and in the kitchen!" Mother looked at me and said, "What is he doing in the kitchen?" And I said, "That's not he, that's sausages!" She then asked, "Where have you been?" So I answered, "At the butcher shop!" I was positive that Mother could not control her laughter that day, but she tried to be stern and said, "Go back, but not to the butcher, to Mister Kiolbassa"—the rest was again lost on me, for I quickly answered "Yes, Mother" and ran downstairs and across the street to the Chicago Alderman's office. Mr. Kiolbassa was sitting at his desk, spectacles on the tip of his nose, busy writing, when I dashed in and hurriedly asked him to come to the Academy because Rev. Mother has some business to transact. He looked at me and told me to sit down until he finished his writing. Then I interrupted him, "Oh no! Please! Come at once because I was to be here long before, but I went to the butcher for sausages." Then he exploded with laughter. His terribly loud laugh could be heard on the street, I am sure. Calling his wife, Harriet, he said, "This little one was to come for me long before, but she went to the butcher instead!" And they both laughed. I waited impatiently until finally, Mr. Kiolbassa got up, put on his coat and hat, and we both started for the Academy. I surely looked quite small walking alongside this giant.

Mother Provincial was already downstairs at the door waiting for Mr. Kiolbassa, so when we came in, she said rather timidly that she was waiting for him. And Mr. Kiolbassa told her right off hand, "I know, I know, this little one was supposed to come for me, but she went to the butcher for sausage." I ran upstairs to tell the girls my terrific mistake, and we all had a hearty laugh. Years after, when I became a professed, those Superiors told me that they could not restrain from laughing during their Council when Mother told them of my big mistake.