The Solemnity of Our Lord Jesus Christ, King of the Universe 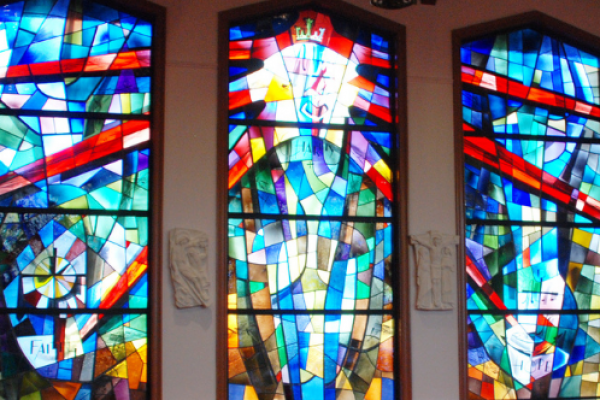 On this Solemnity of Our Lord Jesus Christ, King of the Universe, we celebrate the primacy of God’s kingdom and the sovereignty of Jesus Christ in all things. In the Lord’s Prayer, we pray: “Thy Kingdom come.” Today, the Church reminds us to take pause to realize what we pray for.

This feast, a more recent development in Church history, was established by Pope Pius XI in 1925. He recognized a world made vulnerable at the end of World War I in 1917.  Our human family was left aching and seeking for stability and healing. Ten million people were displaced from their homes and countries, with consequential unemployment, starvation and the breakup of families. Rising dictators like Hitler, Mussolini, and Stalin attempted to build up individual nations – “kingdoms” in their own right – through Nazism, Fascism, and Communism. The false promise that these political movements could address such grave problems was often forced upon a needy world hoping for a “kingdom” and a government that could restore stability, life, and hope.

Pope Pius XI saw the need to address the false and dangerous promises prevalent in our world.  He wrote the encyclical QUAS PRIMAS (In the First), wherein he establishes the feast of Christ the King. He affirms that Christ must take first place in our hearts, in our minds, in our wills, and in our body. Subsequently, Pope St. John XXIII linked this to the second coming by placing it on the liturgical calendar in November, preceding the First Sunday of Advent. Pope St. Paul VI elevated this “Feast” to a “Solemnity”.

Pope Benedict XVI reminds us that “Christ’s power is the power of Love that can draw good from evil, that can melt a hardened heart, bring peace amid the harshest conflict and kindle hope in the thickest darkness. This Kingdom of Grace is never imposed and always respects our freedom. Christ came ‘to bear witness to the truth’ (Jn 18:37), as he declared to Pilate: whoever accepts his witness serves beneath his ‘banner’… Every conscience, therefore, must make a choice. Who do I want to follow? God or the Evil One? The truth or falsehood? Choosing Christ does not guarantee success according to the world’s criteria but assures the peace and joy that he alone can give us. He contrasted this eternal kingdom with short-lived, earthly kingdoms. History teaches that kingdoms founded on the power of arms and lies are fragile and collapse sooner or later” (Angelus, Nov. 22, 2009).

Most recently speaking from the Vatican on Wednesday, November 17, 2021, Pope Francis said that the Kingdom of God “is founded on Christ’s love and is rooted in the heart, granting peace, freedom, and fullness of life to those who accept it”. The Holy Father said Jesus is asking us to let Him become our king. A king who by his word, example, and life sacrificed on the cross has saved us from death and points the way to people who are lost, and gives new light to our existence that is marked by doubt, fear, and daily trials.” But, said Pope Francis, we must not forget that Jesus’ kingdom “is not of this world. He can give new meaning to our life, which is at times put to the test even by our mistakes and sins, only on the condition that we do not follow the logic of the world and its ‘kings’.”

So, today, may the timeless truth of this Solemnity continue to evolve in our world and our hearts.  We join with Pope St. John Paul II who invites us on this Solemnity to repeat with faith the prayer of the Our Father “Thy Kingdom come.” (Homily, 1997) May we focus on the true Kingdom where reigns Christ the King of the Universe.