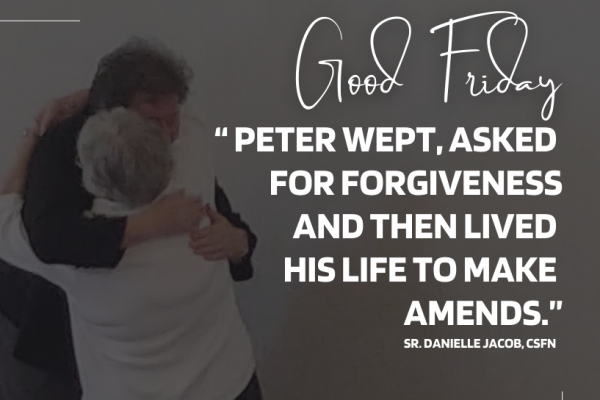 Each of the four Gospels offers a different rendering of the Passion; all of them recall the story of two apostles. Both had fulfilled their jobs as disciples over the years equally well. Both had reclined at the table with Jesus at Passover. Both had their feet washed by Jesus. Both shared in that first Eucharist. Both betrayed Jesus. I’m speaking of Judas and Peter.

I’m guessing that most of us have a less-than-positive image of Judas as the one who handed Jesus over, but do we really know his motivation? Matthew pins it on greed. Mark gives no reason. Luke and John say he was possessed by Satan. Do any of us really know?

None of the Gospel writers asked him why; they too, were speculating as to his reason. Could it simply be that Judas was expecting Jesus to be the long-awaited powerful Messiah who would liberate the Jews from Roman oppression and was just forcing Jesus’ hand? He made no excuses or promises to Jesus; he just went out and did what it appears he was destined to do from the start of time.

And what about Peter? He betrayed Jesus by denying he even knew the man. At a time when Jesus needed friends around and people to speak his truth, Peter betrayed his friendship and said he didn’t even know him – not once, but three times! And this after loudly proclaiming: “Lord, I am prepared to go to prison and die with you.” Peter publicly professed his loyalty and then turned his back when the rubber hit the road.

The first part of their stories is very similar, but the ends are very diverse – Judas ends his own life and Peter goes on to be the first leader of a fledgling church. So, what makes the big difference? In one word: MERCY.

I think Peter believed that God’s mercy was bigger than anything he could do to mess it up. Whereas Judas could not get his head around a God whose love was so large that he could be forgiven for what he had done. Peter wept, asked for forgiveness and then lived his life to make amends. Judas allowed his deed to take him to the lowest depths of despair and he could see no way out.