Gospel Reflection: September 4, 2022 - Feast of the Blessed Martyrs of Nowogródek 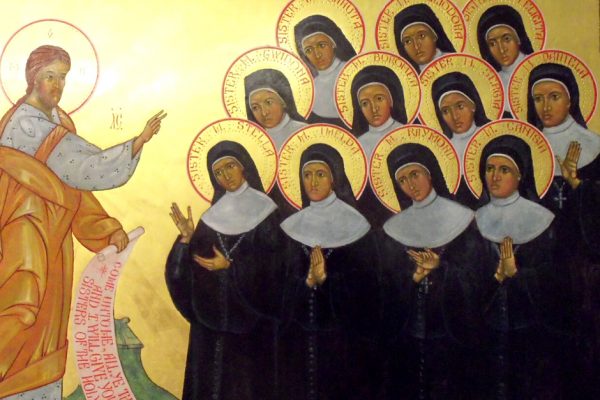 “Anyone who does not carry his cross and come after me, cannot be my disciple.”

“I hate you!” Devastating words to hear on t.v. shows or in real life, when a young teen and sometimes, in imitation, a younger sibling shouts these words as they stomp out of the room where a parent just told the child she or he cannot go over a friend’s house for a sleepover or to a concert. Undoubtedly, the child did not mean it in most cases.  Hate is a strong word and, in this day and age, is often the cause of many deaths.

The dictionary says “hate” has origins in Greek, and also in a Semitic expression meaning ‘to love less, to turn away from or detach oneself from’.

Jewish people, in the time of Jesus and to this day, hold the love of family in great honor and respect, and place great emphasis on the family. The word in Jesus’ time did not mean negation but preference. Jesus, in Luke 14:26, was using the word as a rhetorical device, namely as a deliberate exaggeration to stress that anyone who wished to follow Him would have to carry his or her cross, give up family, possessions, wealth, and more in order to be his disciple. In other words, they would have to break from their comfort zone, which would be costly.

We know of numerous saints who did just this: carried their cross to follow Jesus, costing them their lives, and, for so many, a martyred life. In the summer of 1943, on August 1, eleven Sisters of the Holy Family of Nazareth, after being imprisoned all night in a Nazi commissariat, were brought up and driven deep into a forest, where they were shot and killed and thrown into a grave they had to dig themselves.

The place was near a little Polish town, Nowogródek, which is now a part of Belarus. Here they ministered to the people who grew to love them dearly for their sacrifice. “The [Nazis] were killing priests and arresting fathers and mothers and other members of Polish families.” The people of Nowogródek asked the Sisters to pray for the release of their family members, and pray they did, asking that if a sacrifice was needed, they be the sacrifice, and that the families of Nowogródek be reunited.  And so it was; on this day, the 4th of September, 79 years ago, the Sisters were given the honor of being called Blessed ---Blessed Sr. Stella and Her Ten Companions.

What cross are you asked to bear as you follow Jesus?