Reflection – Feast of Blessed Mary Stella and Her Ten Companions 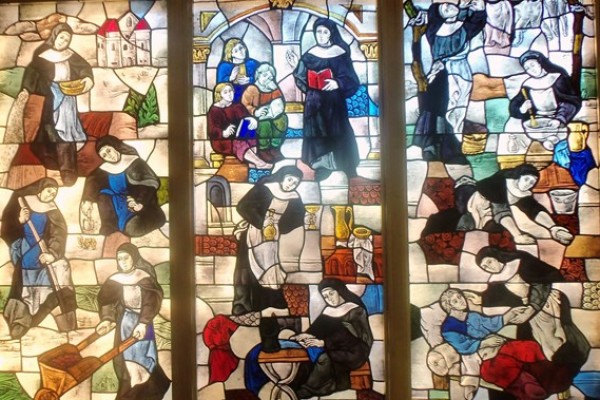 Editor’s Note: On September 4, 2018, at the Provincialate in Des Plaines, IL on the feast day of Blessed Mary Stella and her Ten Companions, Sr. Marie Kielanowicz, CSFN, presented a reflection about our Martyred Sisters during Mass. We share an excerpt of her presentation as we remember not only the sacrifice of our Martyred Sisters, but also the greatness of their lives.

Reflection – Feast of Blessed Stella and Her Ten Companions

You have probably noticed that each of the Scripture readings given for the feast of Blessed Stella and her Ten Companions juxtaposes two human realities – that of suffering and death along with freedom and glory. On the one hand we hear of affliction, torment, and death: "They seemed in the view of the foolish to be dead and their …going forth from us utter destruction…” (Wisdom 3) “…they would have swallowed us alive when their fury was inflamed against us…over us would have swept the raging waters…” (Psalm 124) “We are afflicted in every way possible, persecuted, struck down….” (2 Corinthians 4) Yet, in response to each of these, we hear the reassuring promise: “Do not fear those who deprive the body of life…” (Matt. 10:28) “…no torment shall touch them…they are in peace…” (Wisdom 3) “…our soul has escaped like a bird from the hunter’s snare…” (Psalm 124) “…we are afflicted but not crushed…persecuted but never abandoned…delivered to death so that the life of Jesus may be revealed in our mortal flesh.” (2 Corinthians 4)

Two artistic images of the Martyrs visually express the contrast: the painting by Adam Styka portrays our Sisters before the grave that was to claim their bodies; and the banner which hung from the balcony of St. Peter’s as the Martyrs of Nowogrodek were proclaimed ‘blessed’ is a luminous work by Jerzy Kumala depicting the freedom and glory which is the reward of the Sisters’ sacrifice. How well the biblical passages and 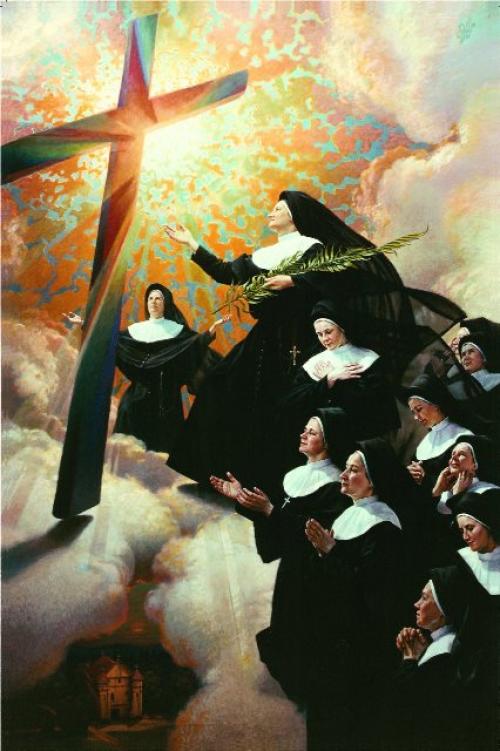 the images tell the story of the life, death and glory of our eleven martyred Sisters, women whom Pope John Paul II has called

“the most splendid legacy of [our] Congregation.”[1]

Each year, we celebrate the feast of eleven Sisters who were martyred 75 years ago in a lonely pine and birch forest in Nowogrodek, Belarus. Every year on September 4th, we remember Sisters Stella, Imelda, Raymond, Daniela, Canuta, Sergia, Gwidona, Felicita, Heliodora, Canisia and Boromea, – women whom the Church holds up as shining witnesses of the Gospel message of love. And, we remember too, Malgorzata, the lone survivor of that community, the “white martyr” who lived her martyrdom for all the years following the execution of her sisters. I often wondered why the Church designated September 4th as the feast day of the eleven martyrs. Then, a few days ago, I discovered that our first Sisters arrived in that town on the far eastern edge of Poland on the fourth of September, 1929. In the mind of providence, perhaps, it was to be a date with destiny.

When the Sisters came to Nowogrodek in 1929, they were most unwelcome but with the strong encouragement of both the Bishop of the diocese, and Mother Laureta, the Superior General, the Sisters remained and, over the years, they generously served not only Poles, but also Jews, Belarusians and Muslims (Tartars). The women who gave up their lives on August 1, 1943 continued a good work begun by their predecessors – teaching and catechizing children, caring for youngsters  who needed a home, teaching skills such as knitting and weaving to young girls, visiting the sick, the dying and the abandoned. In a spirit of hospitality, they welcomed all, not dividing people into rigid categories of friends and enemies. They held religious services for the faithful and, bit by bit, exerted a powerful influence on the diverse community, reinvigorating the spirits and bolstering the hope of the townspeople. And in the darkest of days that descended on the residents of Nowogrodek, the Sisters ultimately lived out the words spoken in their name by their superior, Sister Stella: “If sacrifice of life is needed, O Lord, accept it from us who are free from family obligations and spare those who have wives and children in their care. We are even praying for this.”[2]

Two qualities dominate my thoughts these days as I reflect on the lives of our sisters: the first being their simple ‘ordinariness’ and the second, their deep prayer and faith. First, the eleven sisters were just ordinary women, doing their everyday work in one small corner of the world – all the while trying to live out their consecration to God in service to His people. In that respect, we are very much like them – each of us living our daily lives, doing the best we can, trying to grow ever more faithful to the following of Christ we profess. The eldest was 55, the youngest 27. They were diverse in temperament and personality, not sugar-coated saints, but women both graced and flawed as we all are. Some were healthy and strong, about half had serious health conditions. Some were shy, quiet, and sensitive to criticism; others had to struggle with their fiery, impetuous, and demanding temperaments. Three were from affluent families, one even from nobility; most, though, came from poor peasant families and had little or no formal education. A few served as teachers or catechists, the majority worked on the farm, in the kitchen and laundry or cleaning the school. They cared for the ‘Fara’, the historic white church on the hill, and organized religious services for the faithful. Their simple lives were a source of inspiration to those who witnessed their prayer and daily self-gift as faithful followers of Christ. The quiet example of their lives, not so much what they did, inspired the people and spoke volumes. It seems than many, if not most, of the Sisters were quite unknown to the villagers, for their humble ministry was carried out in the shadows, not the limelight.

Beneath this simple exterior life and ministry, though, another profound reality was at work – a strong and vital faith in the God to whom they had given their lives. How well they must have tried to live out the vision of our foundress who said: “This is how life in Nazareth appears to me: externally, a simple, humble life of prayer, work, self-sacrifice … but in the depths of the soul, the most profound union with God.” As is true for most of us, that faith was the quiet backdrop of their daily lives; a peaceful spirit of prayerfulness that sustained them each day. And then, one day, their courageous faith was writ large, in bold relief, as terror spread through the village of Nowogrodek. We know the story well – German occupation, mass deportations and killings in the village square. To whom did the townspeople look for strength and courage?  To the Sisters whose faith enabled them to say “If sacrifice of life is needed, take ours.” In the end, the source of their courage and that which united them – in all their human diversity –was the One whom they followed, the one to whom, on the day of their religious profession, they spoke the words we have all said: “Accept this humble and complete sacrifice of myself…”

As we contemplate the life, death and glory of our martyred Sisters, we celebrate not only of the greatness of their lives; in them we see the best of who we are called to be and are reminded of the promises we have made. What they have lived - humbly, simply, and then with unspeakable courage and faith as they walked towards an empty grave – we, too, are challenged to live. We will probably never be faced with the terrible reality that confronted them, but daily we are called to a dynamic faith as we live out our ordinary days, walking the narrow way that leads to life.

“They shall dart about as sparks through stubble” (Wisdom 3) the Scripture says – shining through the darkness, “the snare broken,” their souls in glory…for having lived the words of the Lord: “There is no greater love than this than - to lay down one’s life for a friend” (John 15:13) both in the simple, generous lives they lived, and the valiant, heroic death they endured.

Blessed Martyrs of Nowogrodek, pray for us.

Prayer through the intercession of Nowogrodek Martyrs