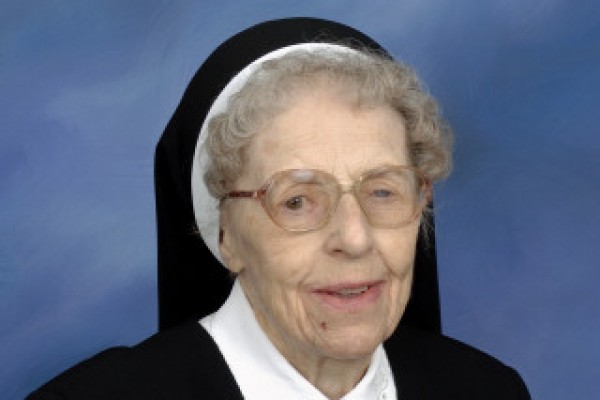 In her final years, Sr. Ignatius (Marie) Remian had lost her vision and much of her hearing, yet she continually prayed her rosary for numerous persons and their intentions. These seeds of devotion to Blessed Mother were planted in childhood by her mother who fostered Sr. Ignatius’ spirit of prayer.

Born in Chicago nearly one hundred years ago to Charles and Mary (Kowal) Remian, Marie was the second of four children, and the only daughter. She attended St. Hyacinth Grade School in Chicago where a Sister of the Holy Family of Nazareth suggested that Marie pray for the gift of a religious vocation.

When Marie graduated from the eighth grade in 1934, she became an aspirant in Des Plaines, IL. Though her father died shortly after she left home, her mother encouraged her to remain in the convent. In1937, she was sent to Rome for her novitiate experience. She professed her first vows in Albano, Italy in 1939.

After returning to the U.S., Sr. Ignatius was assigned to St. Mary of Nazareth Hospital in Chicago and began training at DePaul University and Northwestern University to become a Medical Technologist, a career that lasted her lifetime.

Between 1939 and 1986, she served at St. Mary of Nazareth Hospital in Chicago, as well as Mother Frances Hospital, Holy Cross Hospital and Bethania Hospital in Texas. In the 1940s, she was involved in doing research on the RH factor. She was also instrumental in planning and designing an 18,000 square foot Clinical and Anatomical Pathology Department at St. Mary of Nazareth Hospital and served as the department’s director.

From 1992 until 2002, Sr. Ignatius ministered at Holy Family Medical Center, in Des Plaines, as the liaison between doctors and patients’ family members. She retired from active ministry in 2003 at the age of 83.

Though she served almost 65 years in healthcare ministry, Sr. Ignatius once wrote, “Prayer has always been my most loved occupation.”

On Saturday, November 3, 2018, Sr. Ignatius told Deacon Jack Smith, who had brought her Holy Communion, this would be her last Communion on earth – the next would be face-to-face with Jesus in eternity. On Sunday, she told the Eucharistic Minister that she had received her last Holy Communion and asked only that the minister pray with her. Early on the morning of Monday, November 5, she took her last breath, waiting, so it seemed, for her favorite caregivers at Nazarethville in Des Plaines to arrive for the morning shift.

Sr. Ignatius’ Mass of Resurrection was held November 7 at Holy Family Convent in Des Plaines. Interment was at All Saints’ Cemetery also in Des Plaines.